Finding Your Own Sound With Any Instrument

Syncronicity was at work this week. A week ago I was talking with fellow drummer, Ari Moosavi about drummers having their own sound. Ari is a great drummer with a distinctive sound. His cymbals are some old, cheap Japanese ones. The sound is very dry, very distinctive. The cool thing about them is that they don't sound like a million other drummer's cymbals. And Ari can make some beautiful music with them. So if anything, they are very Ari sounding.

I've had this discussion with various other drummers over the years, and recently again on Facebook. Sometimes it's come to the point of arguing about which is more important to getting a drummer's sound: the gear, or the drummer. My personal feeling is that, all things equal, 90% of your sound comes from you. It comes from how you hit/strike/touch the instruments. It comes from the amount of pressure/force you play with. It comes from where you strike things. And it even comes from the notes/rhythms you choose.

I learned years ago, from working in drum shops and playing on hundreds of drum sets, that I can sound like me on any set of drums. This idea of the sound being the drummer was reinforced when I let my friend from Switzerland, Fredy Studer, use my drums for a gig 10 years ago. Even though they were my drums, tuned my way, he still sounded like himself, and not me.

Look at Bill Bruford, it didn't matter what snare drum he played—an old Olympic, a Ludwig, various TAMAs with various shell types—his snare drum always sounded like Bill Bruford, and he's the only one to sound that way. Neil Peart is another good example. I've listened to him since he joined RUSH, and no mater what drums he plays—Slingerland, TAMA, Ludwig, DW—he still sounds like Neil Peart. 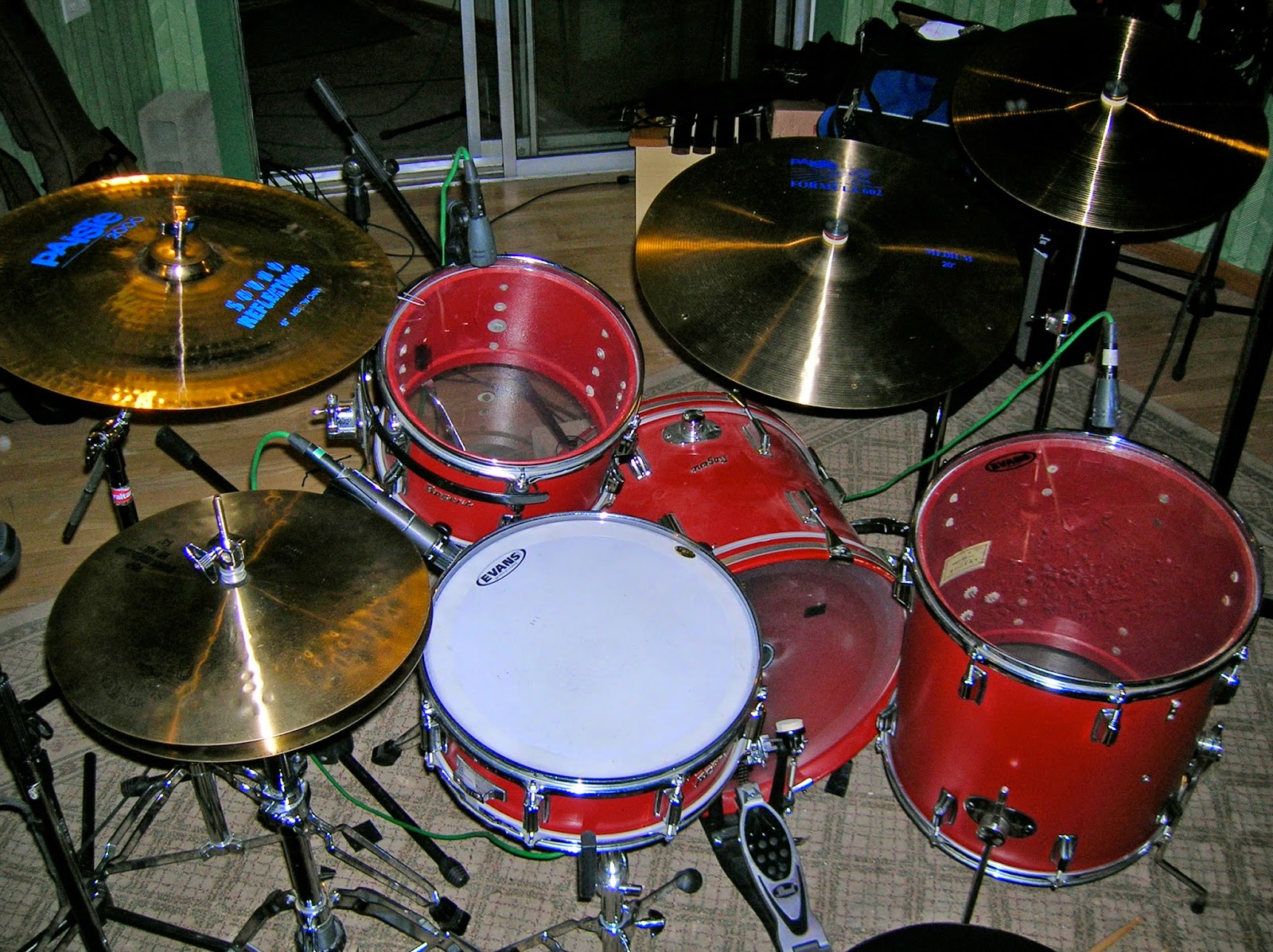 My trusty drums & cymbals I've had for ages…

Now please understand that I'm not against having great drums, cymbals, etc. Quality instruments can often make the job easier and sound better. But, and this is the big thing, you can often get a very workable sound from just about any drum or cymbal. What I find interesting are drummers who constantly change their gear in the search for some mythological ideal sound. How can you find any instruments's potential in just a few days or weeks? Why not spend some actual time with it and learn what it can do, what sounds you can get out of it, and find a sound that is YOU.

I really think it's important to stick with an instrument and work at finding and unlocking all the sound potential that you can from it. But that takes time. Other musicians tend to have one main horn or string instrument that they play for a lifetime. Or in the case of someone like Jeff Beck, he may have new guitars frequently, but he knows the guitar is only a tool, and the way he plays it is how he gets his sound.

Obviously, broken or inferior gear can be a hindrance. But you don't need a $10K Craviatto set of drums to be a great drummer. You can make great music playing a $500 Export/Swing Star/Stage Custom/etc. With the right heads and the right tuning, you can be in good shape. If the drums are round and have good bearing edges, you can get a good, usable sound. I’ve heard some of the best drummers in the world play various house & rental kits that weren’t the best drums, but they made them sing.


"You Be" was recorded in the fall of 1985 at the famous Ludwigsberg studio in Germany and is the third recording of BassDrumBone. Our producer Stephen Meyner had overlooked that I don't travel with a drum set so when we arrived I was faced with rummaging through the closets and basement of the studio trying scare up something resembling a trapset. In the end you would never know it, but if you had a look at what I taped together out of microphone stands and toilet paper rolls you would be amused. Another one of those "challenges" of being an improvisor. ~ Gerry Hemingway


I'm a big fan of Gerry's drumming and music. You Be is a great album. You would never know the problems with the drums, because Gerry is such an amazing drummer that he makes it happen. In fact, for most gigs and recordings, Gerry uses different drums, but he always sounds like Gerry Hemingway. I remember interviewing him for Modern Drummer and he was almost embarrassed to admit that his own drum set was a well worn Ludwig Club date kit he had since high school! Here we have one of the best drummers in the world and he doesn't worry about what gear he will be playing. He knows that he is the music.

Make magic happen with whatever instruments you have…