Recently, I was asked a question about how Gongs are notated in a musical score. Here are various examples of different ways they have been notated, from traditional classical, to modern musical forms.

The first thing is to differentiate the 2 main types of Gongs: the flat faced, usually termed Tam Tam in a classical score, and the Bossed Gong, with a raised center boss (AKA cup, nipple).

A good example of a traditional symphonic Tam Tam part would be from Gustav Holst’s, The Planets. This example is from Mars, the Bringer of War:

We can see the Gong/Tam Tam notated traditionally on a single staff line.

The next example is from Puccini’s opera, Turandot. This is the Tam Tam part, notated on the bottom line.

Example #3 is also from Turandot. The score also calls for Tuned Bossed Gongs. Unfortunately I was unable to find a score example of them.

John Cage used various Gongs in his percussion music. This is an example of how he notated the Gongs used in his First Construction (in Metal). This example shows how various techniques, such as raising or lowering a Gong in a tub of water, are notated. It also shows different notation for playing the center or edge of the Gong.

A great example of contemporary Gong music is, Metallic Music, written and scored for solo Gongs by Peter Jarvis. The first example shows some of the playing directions. 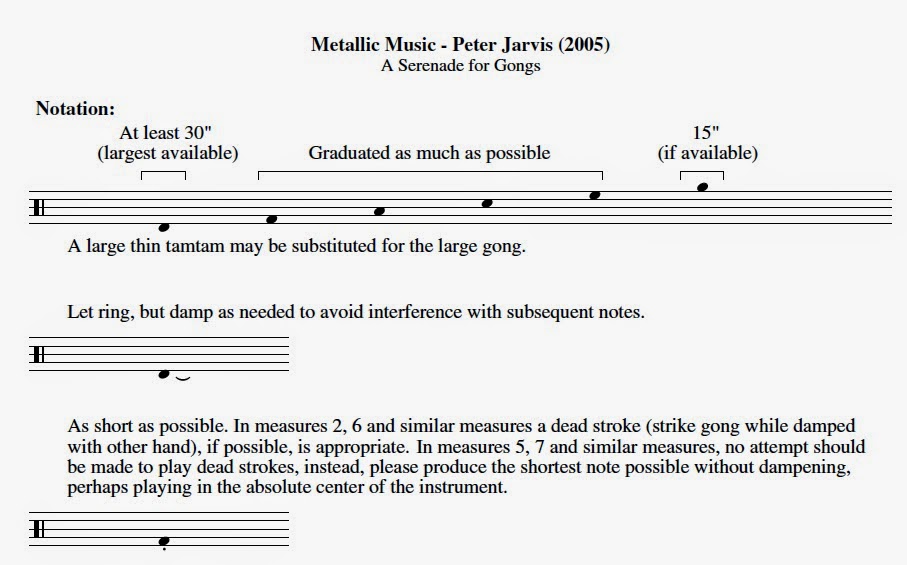 The second example is an excerpt from the score. 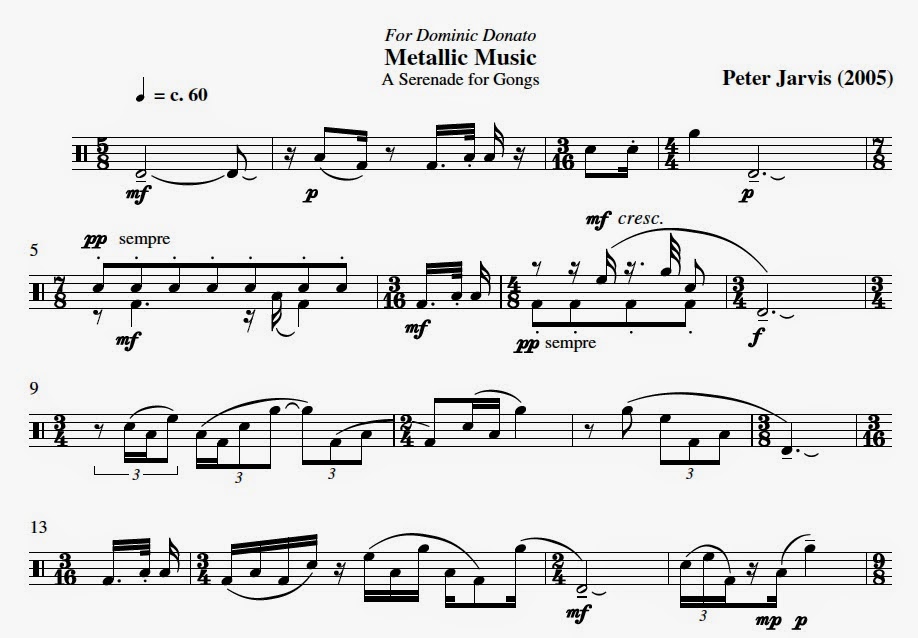 The score can be purchased from www.CalabreseBrothersMusic.com. It was written for, and recorded by, Dominic Donato on his album, Metalmorphosis, available from http://www.capstonerecords.org, Amazon, or itunes.

In contemporary music, we can find the different types of Tam Tam’s/Gongs used designated with glyphs (line #1 below), or a standard word description (line #2).  We can also find mallet types designated with glyphs or word description (line #3). Stem diection can be used to designate playing the center or edge. We can have multiple glyphs showing both instrument & mallet. And we can find note duration designated. (line #4) 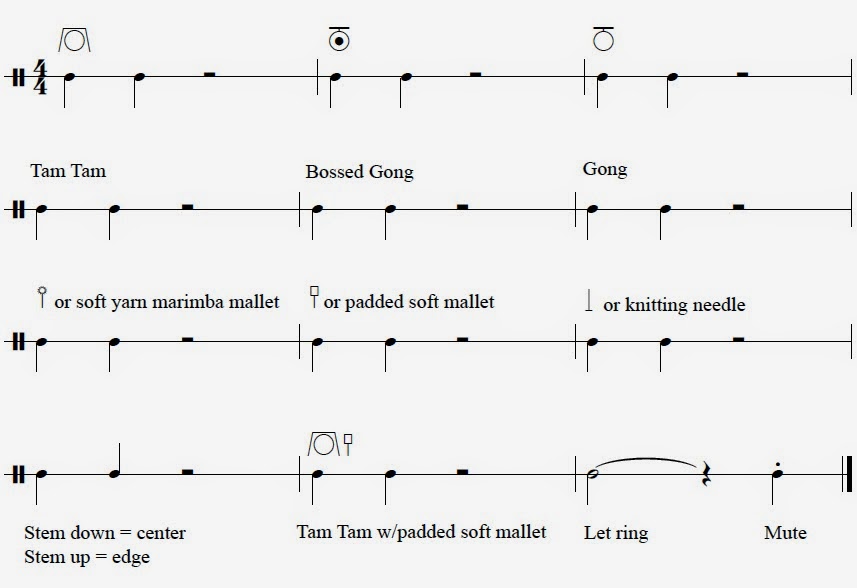 Asian Gamelan or Kulintang are an aural tradition, where the music is learned by copying the teacher. Another way of notation that is often used for these is a sort of graphic tablature. The first example is for Kulintang, a set of 8 pentatonic Gongs from the Philippines. Each box designates a unit of time (here a quarter note), while the number represents the Gong played. The numbers go from largest (1) to smallest (8) Gong.

Here is the same example in a tablature style notation (similar to guitar TAB) where the note heads are replaced by the number of the Gong.

Both examples are from the research paper, Improvisation in the Philippine Kulintang (2010) by Hideaki Onishi and Pemela Costes-Onishi. www.aawmconference.com/aawm2010/images/1aawmonishipaper.pdf

As we can see, there is a variety of notation used for Gongs. Composers might also use further, detailed descriptions of either the instrument (size, pitch, weight), or the way it is played (center, edge, horizontal laid on carpeting), or both. This can often be a detailed analysis of the part in a preface to the music. Or the composer may merely write down the notes and leave Gong and mallet type up to the performer.

Other contemporary scores may use some type of graphic notation, or some sort of pictogram. Extended techniques, such as bowing, scraping, rubbing, may also be indicated.