Showing posts from October, 2013
Show all

The Importance of Repetition & Muscle memory 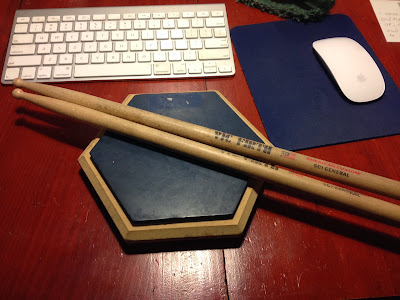 This is an issue I discuss a lot with my students. Practicing. I know how it is, sometimes it's hard to practice, hard to make the time, hard to get in that frame of mind. But practice is as important as anything we do. Practice enables us to play. To play with a sense of freedom and adventure. No one wants to struggle during a performance. No one wants to make mistakes or just get by. We've all had those nights when we just couldn't seem to do anything right. But we've also had those nights when everything just flowed from our hands like we were anointed by the drum gods themselves. But how do we struggle less and feel anointed more? Practice Indeed Makes Perfect Practice also releases us from the struggle. Think of your favorite athletes. They practice a lot. They hit/throw/kick the ball over & over & over. Then they do it some more. Why? Because they want their motions to become second nature, to become a very part of them. When you practice, it&
Post a Comment
Read more

The Importance of Lineage

October 21, 2013
When you decide to pick up a pair of sticks, brushes, or mallets, you are not alone. You are part of a greater community of drummers that expands back to probably the dawn of mankind. Like it or not, you are connected to all other drummers & percussionists out there. Unless you grew up alone in the woods, or on an island, and you found a drum and taught yourself to play, you are part of a lineage. And that lineage is important. No matter what drummer or percussionist you listen to, they have built what they do upon what others have done before them. And it's very important to find out who their influences were. Sometimes you'd be surprised by what drummers and what music someone cites as being influential, because it's nothing like the music they play, but the roots are there if you dig for them. And it's not just drummers and other musicians. Who have they studied with? What books/materials have they studied from?  lin e age  |ˈlinē-ij| noun 1  lineal descent
Post a Comment
Read more 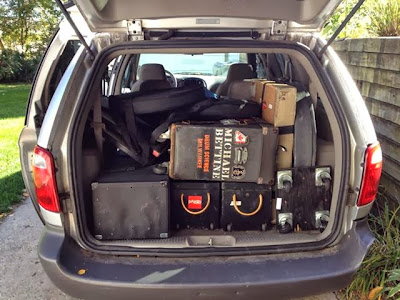 This is what I do It's been a while since I played a full solo concert. Part of that is the sheer enormity of just putting it on. When I say solo concert, I mean solo concert, as in, I do everything: hauling the gear, setting things up, performing, tearing things down, then hauling it back home. My youngest son, Aiden, used to help a lot, and knows how set most everything up. But he's off to University. Now it's just me, which explains why I don't drag the whole set up out as much as I used to. So I finally played another full solo concert last Sunday, October 13th. The venue was a beautiful old church with high marble ceilings and large stained glass windows. These old churches were built to magnify the sound of the choirs and pipe organs, so the acoustics are really quite amazing. I had been looking forward to playing there and making a live recording. Packed and ready, 12 cases of heavy metal This is how it is in real life. It became a day of rushin
Post a Comment
Read more

It's all about Listening—the Art of Improvising.

October 07, 2013
Choices Made, Direction Taken (I'm often asked about how I create the music I play, especially the improvised stuff. This is an attempt to put into words how things went for me last night at a gig, while these thoughts are still fresh in my brainbox.) I made a conscious choice 12 years ago to play my own music. I had played cover songs for what seemed like forever. Nothing wrong with that, but I’d been there, done that. I’d played my own music all along, but this was different. This was a commitment to play only my music in most situations. I’m not saying everyone should make the same decision, but just that this was right for me. So the one big thing I’ve learned is that this music I create is all about self discovery. It’s about who I am now, and who I am in the future. A big part of this journey is improvised music, which I love, because you really have to put yourself out there. If you look at any sort of art form—music, dance, painting, writing—if you really jump
Post a Comment
Read more

The Myth of Endorsements - Part 4

October 03, 2013
Changing Endorsements It's interesting to see how much hostility there is online, in various drum forums, when an artist changes endorsements. I can't believe the comments, which range from anger, to mocking.  It's really not fair to judge anyone from afar on their changing endorsements.  I'm sure that all drummers have changed brands of heads/sticks/drums/cymbals/etc. at sometime during their career. And behind those changes were probably hundreds of reasons for the changes.    As all of you probably know, drums/cymbals/sticks are very personal choices.  You develop a relationship with the gear you use.   But sometimes, you just want/need a change.  Why do  you  play what you play?   Why Do Artists Change Endorsements? I could probably write a list that would quickly become a vast dissertation on the various reasons for change, but I'll just look at the major ones here.  Drummers have various reasons for changing endorsements. As a writer, I’ve interviewed
Post a Comment
Read more
More posts