Breaking In Your Metals

March 21, 2013
You've probably heard the same stories I have, about Elvin Jones (or maybe some other famous jazz drummer), who when he got new cymbals, reportedly would spend hours rolling on them with timpani mallets in order to break them in. The theory is that by vibrating the metal excessively, the molecules settle and the sound ages and improves. This is a great story, but is it true? Does this really work?

I must say that from personal experience that there is something to this. But I think it's a two-fold experience.

So this process is probably a bit of both.

My personal experience can vouch for things breaking in. One example is the 24" Paiste Venus Planet Gong that I got 5 years ago. At first it was very stiff and had a sort of tight sound that really did not excite me. I even questioned whether I should have gotten a different type of Gong. But I stuck with it and gradually the sound improved and opened up, so much so, that it is one of my favorite Gongs now. I was just using it at a rehearsal tonight and the sound was amazing! It was also very responsive to my touch. 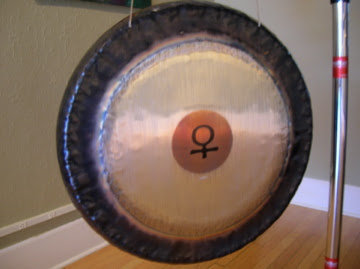 The same thing happened to a very beautiful 23.5" Water Gong that I got from Michael Paiste 9 years ago. It had a great sound when I got it, but was a bit stiff. I kept playing it, and one night in the middle of a concert tour, it just opened up and delivered a world of new frequencies. I could repeat this story for various other Gongs and cymbals I have.

So the moral of this story, if there is one, is to play your instruments! Don't just store them, take them out and play them! They need it.