June 26, 2011
This series was originally written back in 2004/05. It represented my search for something different in my drumming - both performance and composition. The whole search started when I purchases a set of Philippine Kulintang Gongs. This is a set of 8 pentatonic bossed Gongs that are played horizontally, suspended in a frame. Partly because I had been a fan of Gamelan music for years, I decided to set them up in 2 rows, similar to the Bonang pot Gongs of the Gamelan. The other aspect was to make them more compact in my set up.
From there, I was inspired to build a drum set that I could play in the same sort of way, using the same sort of visual patterns as I had been using with the Kulintang. The whole experiment was successful and I created the music that I heard in my mind. I ended up using the set up for about 3 years, until I moved on to a new idea.
This is a revised and updated version of the original unpublished article.
Be Your Own Map Maker
Part 1 - Creating Drumming Maps
Maps are a chart with which to plot a course. Most of us follow pre-existing maps, retracing paths that have been well defined by ourselves and others before us. One danger is that these well worn maps can become ruts that we get stuck in. It’s easy to create a musical comfort zone that one rarely, if ever, ventures out of. I had reached a point in my musical life that I was tired of playing the same old things I had done for the past 20 or so years. As much as I liked a lot of the music, I was tired of playing the same licks, the same routines, and generally doing the same sort of band thing I’d done since my teens.
A few years ago, I felt a burning need to make my own way and follow my own personal vision. I decided to set out on a path of playing solo percussion. Part of the impetus came from all the hours of playing alone at the drum kit. Many of the great sounds you hear are often lost in the sound of the band. Playing solo lets all the subtle, and not so subtle sounds, be heard.
There is something exciting about pioneering your own course through the uncharted musical universe. It is a voyage of self-discovery as much as anything. And what a journey it has been.  My current set up includes 10 drums, over 50 cymbals, 40 gongs, and various small percussion. While most people will never go to the extreme that I have, I feel that many of the ideas I have developed or come across can be applied in a variety of musical situations. A lot of this is just looking at your equipment and techniques from a different perspective.
This series will explore many of those ideas I have come across along the way, and look at how they came into being. First let’s look at how my drum set up evolved to what I use today[2005], how I began to explore the potential of metal sounds with an expanded cymbal set, then added gongs for both melodic and dramatic potential, and some of the playing techniques I have come across or developed.
Drum Evolution
At first, I worked with pre-existing ideas of what a “drum set” should be. While I expanded my cymbal set up to include multiple “trees” of different cymbal groupings, which gave me various melodic possibilities, I was still working within the confines of the typical snare/toms/bass drum set up (photo 1). The problem I found was, that while this set up worked well for jazz and rock, it didn’t do much for mapping out new territory. So much had already been done before with a standard drum set up. 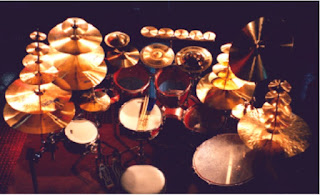 I had been using my snare drum, without the snares, as another tom. I wasn’t playing back beats, or any sort of ride cymbal patterns, so a snare drum wasn’t really needed. I was consciously moving towards playing both rhythms and melodies that were not the standard jazz or rock repertoire. The next step was to get the drums in closer. I put them in a central cluster (photo 2) consisting of a 10˝ tom, two 12˝ toms, a 13˝ tom, and a 14˝ snare (minus snares). I liked the idea of having the drums in front of me and easily accessible. I also added a cable hi-hat to move my hi-hat cymbals out of the way of the drums, but it still didn’t work the way I wanted it to. 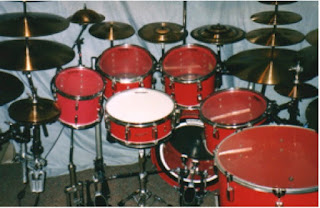 As a longtime Gong player, and fan of Gamelan music, one of the things I enjoy the most is playing my Kulintang, a set of 8 bossed Philippine gongs (photo 3). While they are normally played in one long row, I built a stand for mine that put them in 2 rows, much like the Gamelan gong chimes. The arrangement was compact and easy to play. I wanted the same sort of feeling and melodic arrangement on drums. Then the idea came to me to build a Gamelan drum kit that put the toms in 2 rows directly in front of me.
While It’s never recommended to make drastic changes to your gear shortly before you embark on a concert tour, I did exactly that, completely revamping my drum set up. This was one of those times when inspiration hit and it felt like the right thing to do. I had been modifying my set up a little at a time, trying to achieve a sense of balance between the actual physical layout, a sense of ease and comfort when playing, and the music I heard in my head. Then everything changed when I found a set of 3 toms (10/12/14˝) in a local music store. These were perfect for my project.
After acquiring the toms, the next step was to strip the drums down to bare shells, then take them to a cabinet maker. I had all the drum shells cut in half, now giving me 6 shallow, single-headed drums. After reassembling the drums, I had to rebuild my rack with 2 front crossbars to accommodate them. Whereas the Kulintang pitches went high to low in a left to right direction, the drums would be set up going left to right. Also, the gongs were in 2 descending rows, while the drums, with an added 16˝ tom and 2 bass drums, alternated pitches between the rows in a descending order. 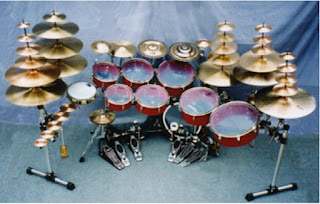 While the set up is not exactly a mirror image of the gongs, it provides me with the same sort of sticking motions and melodic flexibility. The drum arrangement also affords me the possibilities of playing various chordal and arpeggiated melodic ideas. I have a 7 note scale to work with, as well as 2 more notes in the bass drums.