The Genesis of a Composition by Chance

June 12, 2011
I personally think that the best composers for percussion are often non-percussionists. They see possibilities and sounds that we percussionists are blind to. As a percussionist, we easily get into ruts and patterns that we then repeat. Many of the things we write are predictable because they are based on what we already know, not what we don’t know. It’s very difficult to try and think like a non-percussionist.
Composer John Cage became a percussionist out of necessity, because he formed a group to play his new percussion compositions. But he wasn’t trained as a percussionist, so he didn’t bring years of rhythmic baggage with him. To quote cage, he listened with “Happy New (y)ears!”
Iannis Xenakis was an architect by trade, his percussion compositions are as much rhythm constructions as anything. His view seemed to be more about the sounds and how they interacted, than in the rhythms.
In the past year and a half I’ve written 4 books of drum and percussion solos of 10 solos each. As a trained percussionist, I’ve become painfully aware of my own rhythmic tendencies. It’s all too easy to reach for a familiar rhythm, or a familiar movement around the drums. To that end, I’ve consciously worked to move out of both my own rhythmic comfort zone, and to not think like a drummer.
For 8-6-3 Chance I removed the idea of choice in order to set up a more random sense of rhythm and structure. The solo is based on 4 indeterminate pitches: snare drum & 3 toms, 4 concert toms, or any combination of 4 instruments (wood blocks, cowbells, etc.). For this composition, I came up with a framework of 3 ideas, and then let chance decide the outcome. The title refers to the framework:
The 1st thing I did was decide on how many measures. This came out to 106. From there, I took a standard 6-sided die and cast it 106 times. Casting a 1 meant that the measure would have 2 - 8th notes, casting a 2 would be 3 - 8th notes, etc. on up to casting a 6 would be 7 - 8th notes in the measure. So I did this successively for each measure to determine the rhythmic structure.
After the length of each measure was established, and the overall rhythmic form of the piece was in place, I again cast the die 106 more times. The solo is played mainly on one pitch/drum—on a drum set, this would be the snare drum, while the 1st note of each measure would be played on either the high, mid, or low tom. The die was cast to determine which of 3 different pitches the 1st note of each measure would be on.
With these criteria determined, all that was left was to notate things out. While the solo is not overly complex to play, it does involve some rather awkward movement. Also, there is no repetitive structure to fall back on—it is just a stream of 8th notes. As drummers, we are used to certain rhythmic structures, used to having things move in an often predictable way. Here, the structure is always changing and the player needs to figure out the best stickings to avoid having the hands cross-over each other.
I’ve purposely left the instrumentation indeterminate to further enhance the chance aspect. Thus each performance can be different. While the tempo is marked at 120BPM, this can also be varied to further change things. I’m certainly not the 1st composer to use chance in determining aspects of a composition. John Cage used the classic Chinese text, the I Ching, to help compose most of his music after 1951. Composer Brian Eno co-designed a set of cards called, Oblique Strategies. Each card contains a statement or question that is used to determine what to do next, or to help break through a stalemate. Other composers have used different methods, but the concept here is to break out of the usual drumming habits.
Included below is page one of the solo, 8-6-3-Chance. 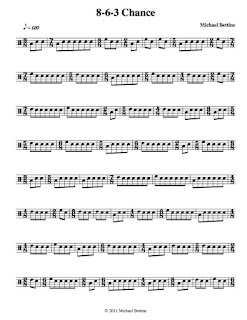