The Art Of Discipline Playing Live

May 20, 2015
As drummers/musicians, we spend years and years practicing in our basements/bedrooms/practice rooms. In fact, we spend the majority of our careers practicing somewhere. Our actual time performing live, on stage, is but a small percentage of what we do. So often when we finally do get to perform on a stage, many of us just want to cut loose, and play with total abandon and/or volume, because, we are like like a pent up race horse finally let out on the track.

But when playing live, this is the time we
should, no, must have the most discipline!

It's all fine and dandy to play whatever you want, however you want, in the privacy of your own rehearsal syudio. And that's good. That is a time to experiment, try out new ideas, and just let it rip sometimes. But being on stage is another beast entirely.

Performing live requires a modicum
of self discipline and editing.

If every musician comes up on stage, especially in an improvising setting, with the idea that “I'm just going to let it rip,” then things are headed for trouble (that is, unless you want the resulting cacophony). Self-discipline really needs to be brought to the stage.

This past Sunday, May 17, I was an invited guest at the monthly Seed Sounds performance series. I brought a rather extensive set up, mainly because that was what I had packed and ready to go. To try and pare it down would've been a logistic nightmare. So I grabbed what was ready and headed of to the concert. 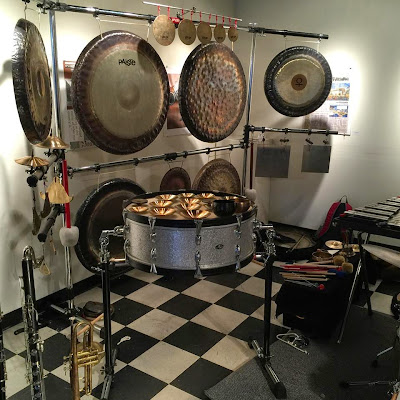 The full set up

I brought Gongs, Bells, Cymbals, and a bass drum to use as a sound table. If ever there was possibility for overkill, this was it. I was playing along with trumpet/flute/bass clarinet (Rick Ollman), drums (Paul Westfahl), guitar (Cody Steinmann), and on the finale, piano (Steve Nelson-Raney). Other than the guitar, this was all acoustic, with no miking or sound system. With the Gongs, I certainly had the potential to drown out most of the other sounds being made, except for the guitar and some drum sounds.

The 4 of us played one long 24 minute improv that ran the gamut from gentle ECM sounds, to spacey Pink Floyd, to intense King Crimson/Last Exit walls of sound. For the most part, I played very restrained and rather quietly. I listened to the music around me and tried to find places and sounds to fit more in the background than to say, “Hey, look at me!” Working with another drummer as excellent as Paul Westfahl, I tried to create sounds that didn't jump all over what he was playing. I often went for things that were in direct contrast to what Paul was playing: short/long, bright/dark, rhythm/random, etc.

A good example is a sort of duet we played, where Paul was playing his whole kit, creating long washes of sound. In contrast, I played a small Bao Gong with a chime mallet, using the 3 different mallet playing surfaces to bring out different, shorter sounds/tones from the Gong. I also muted it against my fingers or leg, as well as playing it wide open. It would've been easy to just flail away at the big Gongs creating a big noise, but why? I found it more interesting to go for a smaller, more intimate sound and see what I could do with that.

3 excerpts from our improv. At 3:40 you can hear the Spoxe hit the floor. 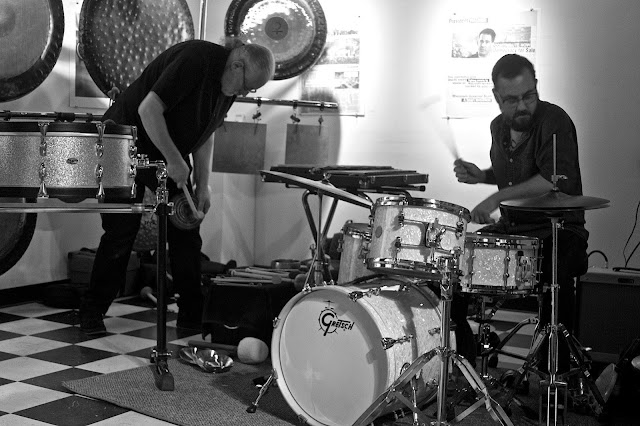 And upon listening back to a recording of the performance, I found that my playing blended in with what was going on around me more than standing out. And that's fine. I like the idea of adding color and texture to the music. I don't have to create big sounds so that I dominate things. This is such an important thing for aspiring musicians to understand:

It's better to support the music and blend with the sound
than to let your ego take over and monopolize the music.

No matter what type of musical situation you are in, it should always be about the music first, and you second.