April 13, 2015
As drummers/percussionists, we are often used to the grand gesture, that is, making a big noise and being noticed. But the problem with always making big gestures is that, after a while, they're not really noticed anymore. When you keep hitting people over the head with something, they tend to tune out after a certain length of time.


I was reminded of this a few days ago when I visited the Salvador Dali Museum in St. Petersburg, Florida. There's nothing like seeing original artworks up close, especially a major collection spanning the artist's career. You can really get a sense of how they worked, how they thought, and often what they were striving for with their works. Photos in a book or on a computer just don't do it. 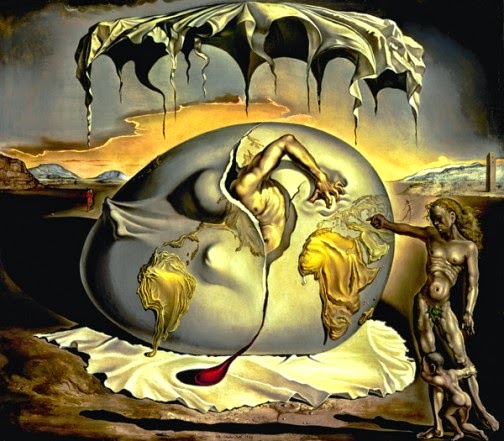 How big is this in real life?

One of the things you don't get from photos is the actual size of the works. Some works you think are really big end up being very small, and vice versa. While Dali did paint some extremely larger works (99.5 x 77.5 inches), many of his most famous paintings are actually quite small. Take Geopliticus Child Watching The Birth Of The New Man. Because of the extreme sense of detail Dali puts into this painting, photos give you a sense that it is a rather large work, but it's not. The painting itself is only 18 x 20.5 inches. That's not really big. But even in person it seems larger than it is. It's impressive and draws you in. And when you look closely, you notice the details, the little things. Geopoliticus on the wall at the museum, giving a sense of perspective

Dali's works are full of symbolism, but they are also often full of little things that you have to get up close to see. While with many paintings you need to back off to get the desired effect, with Dali, he often works on multiple levels. At a distance, you see one thing. Up close, you see another. Up close there are often little figures, little details that have meaning. And when the paintings are small, these details are equally small. But they still have big meaning.

So too with music and what you play. It's not always the biggest, or loudest, or grandest notes that have the biggest effect. Sometimes the tiniest sound, played at the right place, can really have the biggest impact on the music. And sometimes it's also a matter of not overdoing those small sounds: played once, it stands out; played more times, it's not so special anymore.