January 08, 2015
Sometimes as drummers, we tend to isolate ourselves from the rest of the world. We are lost in our own little drum world. It's also not easy to be self critical. We can't objectively look at ourselves from an outsider's perspective. That is why it is often invaluable to listen to what others, especially non-drummers, have to say about what we, or other drummers do. So I would like to present some outside observations: 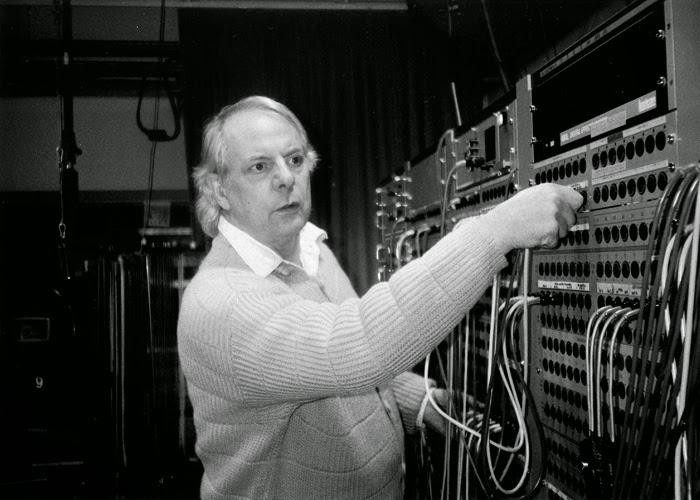 The following observation is from the late, great, German composer, Karlheinz Stockhausen. This longish quote is from The Royal College of Music, Stockholm, May 12th, 2001. Stockhausen was responding to questions from the audience after a performance of “Kontakte,” which he wrote for piano and percussion playing along to an electronic score that he was mixing live. Stockhausen wrote a lot for percussion, and he was very particular about how his pieces were played. He and the other performers—Antonio Peréz-Abellán [piano & percussion], Andreas Boettger [percussion]—had been rehearsing the piece in Sweden for a few days prior to the performance. The question was asked, “Tell us some general things about the interpretation of the work.”

Part of his answer addresses the playing of the percussionist:

…Then begins the work, which I have done many, many times with the performers, to balance! Even this morning, yesterday, last night; this morning three hours – the main corrections, on my behalf, are dynamics; too soft, to hard, depending on the sticks. Most of the percussion players whom I have listened to have their own choice of sticks; it says “hard”, “soft” or “hard metal”, “hard wood” etcetera, what concerns the sticks, and many. Many times I have demanded players to change the sticks, and they cannot really know, and they say; “Well, what do you want?” etcetera. There is no fixed idea of just balance; no sound should completely stick out of the context; no sound should sound ugly, but it should all sound musical, even if it’s a log drum, but with a …[words lost in room noise]…, but it should [produce] a musical sound, which means have enough resonance, a good attack etcetera. There is an enormous amount of taste for the quality of the individual attack, the individual sound required, though I make them, maybe …[words lost in room noise]… of the intensity of the attack. Even in the piano, many times this morning, still, I corrected Antonio [Antonio Peréz-Abellán] for playing, at certain places, too hard, because the hall [the big hall – Stora salen – at the Royal College of Music in Stockholm] is very resonant; it has very good acoustics, so they [the musicians] are used to the rehearsal room – we rehearsed the last four, five days I think, in Hanover, in the rehearsal room, and now they came into this hall two times. Yesterday all day they have rehearsed without me; I had another work. Last night I came two hours, and this morning. The hall decides a lot about the dynamics as an overall intensity as well as the dynamics of the tape.

No matter what type of drummer/percussionist you are, and what type of music you play, these words should be taken seriously:

Here is an excerpt of Kontakte from the recent Mode Records release, Stockhausen - Complete Early Percussion Works, featuring Steven Schick on percussion, and James Avery on piano & percussion. I highly recommend getting the DVD version of this release, as you can watch the very excellent interpretations of Stockhausen's works.

I dare say, that even in something like death metal/thrash metal, your drumming and sound should sound musical within the context of that type of music. It's not enough to just play the notes. To make music you need to give the notes life, and a big part of that life is creating a musical sound. Now in the context of the music you may be playing, that sound could be harsh, dissonant, or noise. In all things we do, context is important. For example, I would not bring a tightly tuned be bop jazz kit to play a heavy metal gig. Similarly, I wouldn't use deep, boomy power toms on a jazz gig. I also wouldn't bring a marimba to play a vibraphone part. Keep in mind the context of the music you are playing and make the appropriate sounds.