The Art of Recording, Part 3

May 11, 2012
First, let's review my 5 rules for recording:
Oh, did I mention to preplan? No matter what type of recording, being well rehearsed, and having a game plan can save you both time and money. This worked out well back in September, 2007, when I recorded 3 complete and different CDs in one 12-hour marathon session. How did I do it? Lot's of planning. Yeah, I can get kind of nerdy with my planning things, but can you ever really plan enough?


The first thing I did was to work with a studio and an engineer I was was familiar with (both my mother-in-law, who is a jazz singer, and my singer/guitarist son had recorded there). Then well before the session, I spoke to the engineer, Chris, about what I wanted to do, and also said that I would send him a plan (I've included a copy of the plan at the end of the blog for your reference). So I put together a recording plan with details of the Gongs I would be using and the music I'd be recording. I also sent along copies of my previous recordings so he would have an idea of what I was after. I wanted to make maximum use of my time for recording, not debating things. This also gave him time to think things over and come up with his own ideas.

My son Aiden came with me and we quickly had all the gear brought in and set up. Then I played a few things for Chris to listen to and get a sound idea on. He brought out different mics and we tried a few short things to see what kind of sound we could get, and find something workable. I left the miking ideas up to him, and for most of the recording, we went with some Cascade Fathead ribbon mics set up in a Blumlein Array. This really captured the live sound of what I do. 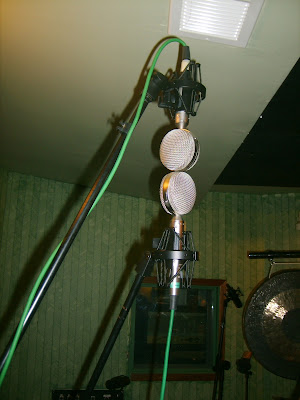 The 1st thing we recorded was my MERIDIAN CD. This was various Gong compositions and improvisations, using my whole Gong set up, (including the Philippine Kulintang set), as well as Tibetan Singing Bowls and some Bells & Cymbals. The Blumlein set up worked great for just about everything. The nice thing is that it kept the sound and the soundfield consistent for the whole CD. 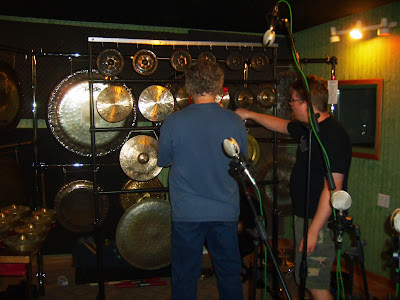 Discussing little details of the Melodic Gongs with Chris, the engineer 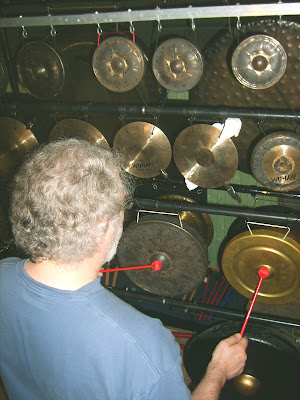 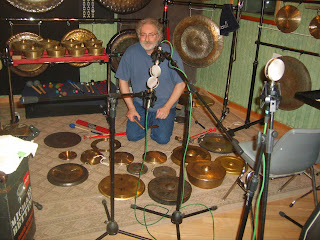 Recording "Calling The Spirits" with Blumlein Array in the foreground

Next up was MANDALA, a one track meditation CD.  After clearing away the things I wouldn't need, we just did a quick check and I played non-stop on the large Gongs for nearly 50 minutes. I knew things went well when I went into the control room and both Chris, and my son, were zoned out. Chris was like, "You'll have to give me a few minutes before we do the next thing."

The next thing was my MICROCOSM CD. This used a very different approach. Each of the 9 tracks was played on just one Gong played with friction mallets. My idea was to close mic things to pick up all the subtle vibrations that I hear, but an audience doesn't. So for each track we positioned a Gong on the stand and then used 2 mics only inches from the back of the Gong to catch the vibrations. On the final track, we had my son Aiden move a mic around the face of the Gong while I played it to get some interesting sonic variations (and as a sort of homage to Karlheinz Stockhausen's "Mikrophonie").


When all was done, we took a short break to pack and load the gear back in my van, then proceeded to mix all 3 recordings. Since most of this was 2-track recording, it was more a matter of adjusting levels & EQ than actually mixing anything.


So the end results was that almost everything was a 1st take, because I was rehearsed and ready. Also, the inspiration level ran high, so the improvised and experimental pieces were easy to capture.


This is from the actual pre-session notes I sent to Chris, the engineer:

Michael Bettine - Studio Recording September 8, 2007
Chris,
Here are my ideas on recording: I want to record everything live with no overdubs or later additions. I’m looking to capture the sound of the Gongs as they are in the studio. In past recordings I added just a bit of reverb to fill out the overall sound, but otherwise it’s pretty straight forward. I have some micing suggestions from previous experience, but am certainly open to your ideas. As I said, the idea is to capture the acoustic sound of the Gongs in the room.
I have everything organized and rehearsed. My past recordings have been basically 1st takes. I want to record 3 separate projects:
Project #1 Meridian:

3 - Large Gongs - 6 pieces - 30 minutes. There will probably be a few improvised pieces built around some ideas I’m working on. We’ll see what happens.
Project #2 Mandala:

4 - Large Gongs - 1 piece - 50 minutes - 1 take. This is a soundscape thing I do for meditation/healing that moves from Gong to Gong and is just one long piece.
Project #3 Microcosm:

5 - Large Gongs - 9-12 improvised pieces - 40-50 minutes. This will be different - all close miced, one Gong at a time. I’m looking to pick up the quieter harmonics/overtones that are only heard up close.
I’m always open to providence, accidents, improvisation, and outside ideas, so we’ll follow the plan, but go with what presents itself in the moment. This will be a lot of fun.
I’ve enclosed photos of the Gong set ups I’ll use. They’ve changed a bit, and some Gongs will be changed during recording, but these are the basic set ups. You can get an idea for miking, etc.
Project #1 - MERIDIAN
1 - Kulintang - 5-6 composed pieces - 20 minutes total (1 track with woodblock). Gongs are 7-9˝ in diameter. 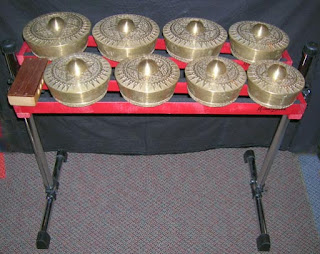 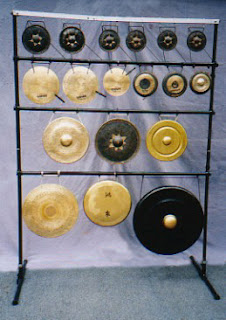 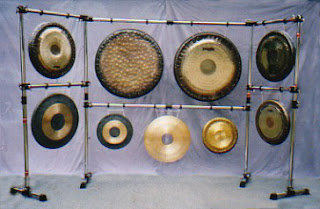 Project #2 - MANDALA
4 - Large Gongs - 1 piece - 50 minutes - 1 take
Project #3 - MICROCOSM
5 - Large Gongs - 9-12 improvised pieces - 40-50 minutes
Additional pieces: I’m working on a piece with 6-8 Gongs laid on the floor to mute them.
Also a possible piece with 1 Gong played by hand like a frame drum. I might also add some cymbals or percussion on some tracks. A lot depends on what I come up with between now and the session. But this basic list shouldn’t change much.