August 08, 2011
I’m always intrigued when I read about someone asking the question, “Can I put a hole in a Wind Gong and use it as a flat ride cymbal?” While at first glance this would seem to be a very good idea, the answer isn’t as simple as just yes, or no. There seems to be a common misconception that because cymbals and Gongs are both made of metal, are both round, and are both percussion instruments, that they are really the same thing, just mounted differently. But the similarities end at both being metal and round.
Let’s take a look at each instrument, both how they are made, and how they react when struck.
Design & Shape
While music books will classify a Gong as an idiophone, a Gong is essentially a membranophone: "any musical instrument, as a drum, in which the sound is produced by striking, rubbing, or blowing against a membrane  stretched over a frame." The face of a Gong is a vibrating membrane that is hammered—which is much like stretching a skin over a frame—which puts it under tension. The hammered, turned over edge of a typical Chau type Gong is a stiffened frame. So think of a Gong more like a metal frame drum (tar, bendir, etc.) where a skin is stretched taught over a stiff, wooden frame. Even a flat Gong, like a Wind Gong, is essentially a vibrating membrane (think of it as a PTS drumhead).
For the face/membrane of a Chau Gong, the raw bronze is hammered, shaped, and lathed to a consistent thickness. A Paiste style Gong starts out as a flat disc of metal with the same thickness all around, then is hammered into shape. Even a flat Wind Gong is not really flat, but hammered into a convex lens shape relatively the same thickness all around.
Now let’s look at how a cymbal is constructed: whether flat, or with a bell, a cymbal varies in taper from a thick center to a thinner edge. The cymbal itself has no frame and vibrates as one piece.
The Nature of Vibration
A Cymbal is an idiophone: "a class of musical instruments in which sound is produced primarily by way of the instrument itself vibrating without the use of membranes or strings." In this case, the whole instrument is one vibrating unit (even the bell is integrated within the cymbal) that vibrates in a very different way then a Gong. I believe a cymbal vibrates in a wave pattern moving around the edge where struck, moving in both directions around the cymbal until the waves meet up 180° from the point of impact, and back again, over and over.
This can be seen in the slow motion video of drummer Mike Mangini striking both a snare drum and a crash cymbal:
Modes & Nodes of Vibration
[T.D. Rossring, The Physics Teacher 15, 278 (1977)].
The following 2 illustrations show the vibration nodes of a cymbal: 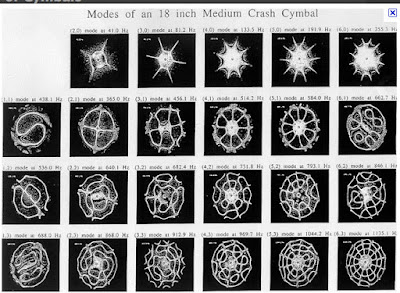 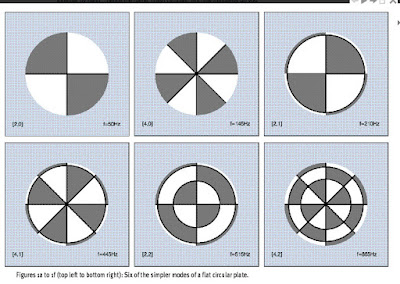 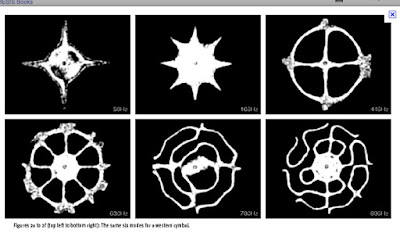 The same six modes for a western cymbal.
Illustrations from: Synth Secrets: Analysing Metallic Percussion
http://www.soundonsound.com/sos/may02/articles/synthsecrets0502.asp
A Gong vibrates as a whole surface/membrane, more like the snare drum head in the Mangini video above than the cymbal. Now if you put a hole in the center of a Gong and mount it on a cymbal stand, you change the nature of the vibrations drastically. The center, dampened by the weight of the Gong, and the cymbal stand, becomes a dead zone. The face is further impeded from vibrating by the weight of the hammered edge now pulling down on it.
A good demonstration of how a Gong vibrates are the 2 photos below. They are both Gongs of mine that have been mounted horizontally, sprinkled with salt, then bowed. The resulting cymatic patterns reveal the various nodes of vibration of the face/membrane: 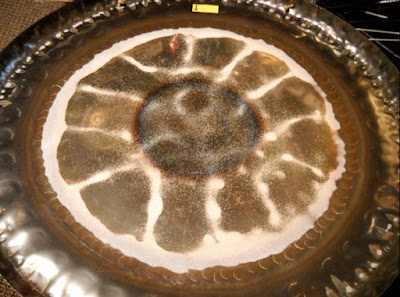 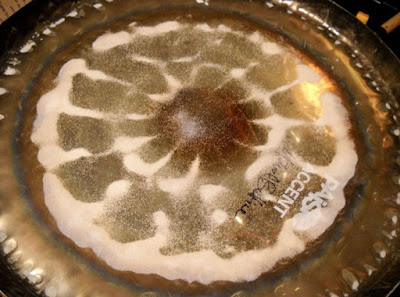 22" Paiste Accent Gong
Note how the above 2 patterns relate to the charts above them.
Bossed Gongs and Specialty Gongs
Tuned/untuned bossed Gongs are another matter entirely. These are usually fairly thick and heavy, and tend to act more like Bells in their vibrations. In a bossed Gong, the raised center is hammered to shape and has a very focused tone. It behaves more like a small bell attached to the face/membrane of the Gong. The thick, heavy, and often deep sides, form a very stiff edge that further dampens overtones, allowing the pitch of the boss to come through unimpeded, with the whole Gong acting more like a Bell in its vibrations. 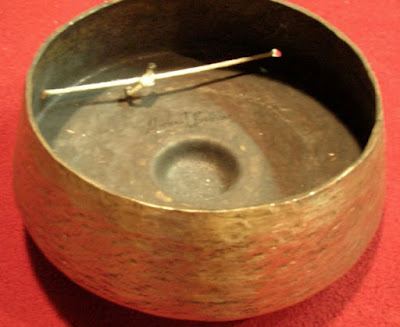 The back of my 13"/6.6lb Gamelan Gong
If you'd like to learn more about how Bells vibrate, check out the website of Australian Bell. It's a very in depth look at Bells, their history, and design. Australian Bell is a leader in modern Bell design & acoustics,
The true American made Avedis Zildjian Gongs always had a center hole, but this was for mounting them on a lathe in order to remove & shape the metal. Similarly, UFIP in Italy made 16" & 24" Tampangs, with a center hole. These were designed by the great Italian percussionist Andrea Centazzo, and were heavy rotocast Chinese cymbals that were hammered and lathed on the back only, with a natural face. 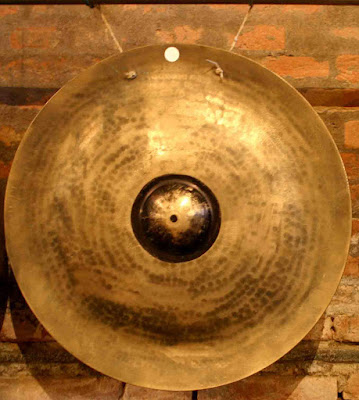 24" Tampang - Photo courtesy Andrea Centazzo
If you've been around Gongs enough, you'll also notice that they vibrate in sympathy with other instruments/sounds, much like your toms will make your snares buzz. Big Gongs can actually be used as plate reverbs when miked up properly.
Make some vibrations…
~ MB