The Genius of John Cage, Part 1 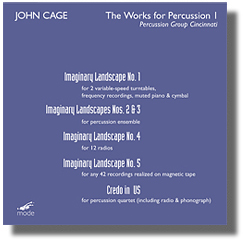 If you are debating whether to buy the CD or DVD version this, I whole heartedly suggest you go for the DVD. Besides having surround sound mixes and bonus tracks, it has a 40 minute video of the Percussion Group Cincinnati discussing & demonstrating the instruments and techniques used on these recordings. The video is of such great historical importance, putting into context Cage’s ideas and music, that it’s worth the price of the DVD alone.
This recording is a monumental release for percussionists, gathering together some of Cage’s earliest and most important percussion works. While Cage was a pioneering writer for percussion, he was also one of the first to use sampling and electronics. His use of recordings on variable speed turntables some 60 years ago foreshadowed the DJs of today.
Credo in US (1942) is scored for a pianist, two percussionists, and a fourth performer operating a radio and phonograph. The first version here uses a recording of Dmitri Shostakovich’s Symphony No.5. The drama of the recording underscores the percussion nicely, especially the high pitched tin cans. The sound collage of recordings and live percussion/piano is often startling in how things mix into a unified whole.
Credo in US #2 uses a selection of 78-rpm recordings of Beethoven, Tchaikovsky, Wagner, and von Suppe. While everything else is the same, the recordings add subtle changes to the mix & flow of things. Written in 1942, Cage was laying the ground for today’s sampling and mash-up recordings.
Imaginary Landscape #1 (1939) is scored for or 2 variable-speed turntables, frequency recordings, muted piano and cymbal. The effect here is one of an early score for a sci-fi film. The frequency tones change, sweep, and move in and out, punctuated by the cymbal, and underscored by the muted piano.
Imaginary Landscape #2, “March No. 1” (1942) is scored for percussion quintet. Tin/steel cans are again used as the main voice, which gives it a sort of “toy Gamelan” sound. Cage’s use of found percussion was a radical move back in the late 1930’s and early 1940’s. While percussionists were used to using a wide variety of sound makers, Cage ushered in and legitimized the use of everyday objects as percussion.
Imaginary Landscape #3 (1942), again for sextet, continues in the same mold as #2. The percussion is more frenetic, but offset by the tone generated mid-section.
Imaginary Landscape #4 (1951) First Version, is scored for 12 radios and features sound & static moving in and out of the sound-field. Because this piece relies on real time radio broadcasts, the Third Version presented here has a completely different mix of sounds & music. While the score is very specific as to dynamics & frequencies, Cage’s fondness for randomness is a big part of things.
Imaginary Landscape #5 (1952), is a fascinating collage of recording fragments on tape following a score directing duration and amplitude. There are 2 versions presented: one with jazz recordings as Cage’s original version calls for, and one made up of fragments from MODE’s series of Cage recordings. As expected, both versions differ and have their own charm. How many of us experienced a similar thing when spinning the radio dial back in our younger days?
It’s important to note that most of this music was written for dance. Cage had a long history of working with dancers, and even today, some 60 years later, the music is fresh and startling, so imagine how it was received when it was first played. Cage, along with Varese’s Ionisation (1929-31), ushered in a new era of percussion music, one that moved away from both the militaristic and ethnic styles that were prevalent in the day.
The actual sound recording of these pieces is perhaps the best I have heard of the many versions I have. It’s not easy to capture all these sounds, but there’s both a clarity and intimacy to these recordings. Percussion Group Cincinnati is also to be commended for the very splendid and spirited performances. They have been long time performers of these works, and were fortunate to work with Cage himself, so they have an insiders view of the music.
MODE is to be commended for this first release of Cage’s percussion music. I look forward to future releases, especially the three Construction pieces.
http://www.moderecords.com/catalog/229_cage.html
~ MB