March 26, 2011
In Part 2, we are going to look deeper at the percussion pieces written by non-percussionists that I mentioned in part 1: Feldman, Cage, Xenakis, and Stockhausen.
Morton Feldman was one of the iconoclast composers of the 20th century. A prolific composer, he unfortunately only wrote one solo percussion piece, The King of Denmark, which has become a mainstay of percussion literature. Feldman wrote King for percussionist Max Neuhaus. Much of Feldman’s music is played at pianissimo or less, making it perhaps the quietest music out there. As a composer who played piano, Feldman was not bound by any sort of routine drummer’s ideas or licks. Neuhaus wrote about the piece in the original LP liner notes:
The piece was written for me to premier at the New York Avant Garde festival in the fall of 1964. Feldman and I had several meetings at my studio on East Tenth Street over the previous summer. He wanted to hear my instruments and explore techniques. With Morty, at that time, it was always about finding ways to play more softly.
In the second or third session, he was still insisting, 'no, it's too loud, too loud'. I suddenly remembered how, as percussion students, we used to practice our parts on stage just before a concert started. In order that the audience not hear us, we used our fingers instead of sticks. I put down my sticks and started to play with just my fingers. Morty was dumbstruck, 'that's it, that's it!' he yelled.
This work is played throughout only with the fingers. Like most of Feldman's music, it is extremely soft and without attacks. The score specifies the relative pitch of each note (high, medium or low), its relative time, and in some cases the specific instruments.
In a 1983 interview with Jan Williams, Feldman comments on King:
The King was a very special situation. I actually remember writing The King - on the beach on the south shore of Long Island and I wrote it in a few hours, just sitting comfortably on the beach. I wrote the whole piece on the beach. And I can actually conjure up the memory of doing it - that kind of muffled sound of kids in the distance and transistor radios and drifts of conversation from other pockets of inhabitants on blankets, and I remember that it did come into the piece. By that I mean these kinds of wisps. I was very impressed with the wisp, that things don't last, and that became an image of the piece: what was happening around me. To fortify that, I got the idea of using the fingers and the arms and doing away with all mallets, where sounds are only fleetingly there and disappear and don't last very long.
Feldman managed to totally reimagine the drummer’s role by removing our primary means of playing, our sticks. While the idea of hand drumming goes back perhaps much further than the use of sticks, in our modern context Feldman dared to make drummers not only come to terms with a different way of playing modern percussion, but he also took the loudest of instruments down to the quietist of sound levels.
Another way Feldman change the percussionist’s approach was by using graph paper instead of the standard 5-line staff for the score. Each square represents one unit of time with the appropriate event marked in the squares. The 3 lines represent high, medium, and low registers of instruments.

John Cage is perhaps one of the most misunderstood composers of the 20th century. While Edgar Varese’s Ionization was premiered in 1933, Cage is considered to be the father of modern percussion ensemble music. His iconic First Construction In Metal was composed in 1939. This landmark piece for 6 percussionists is scored for Gongs, sheet metal, cymbals, automobile brake drums, anvils, and a water Gong (a Gong dipped in water to change its pitch), and uses a rhythmic structure of 4-3-2-3-4, 16 times 16 4/4 measures. 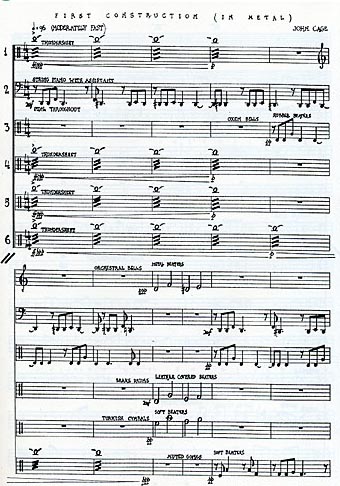 Ianis Xenakis was a Romanian born Greek who studied engineering and architecture. He brought these interests into his music, often more designing than composing his music. Perhaps his most famous percussion piece is the solo, Rebonds. Xenakis describes the piece in the score:
“Rebonds is in two parts, a and b. The order of play is not fixed: either ab or ba, without a break. The metronomic indications are approximate. Part a only uses skins: two bongos, three tom-toms, two bass drums. Part b uses two bongos, one tumba, one tom-tom, bass drums, and a set of five wood blocks. The tuning of the skins and the wood blocks should extend over a very wide range.”
Xenakis’ percussion music is some of the most difficult to perform. Rebonds, while written on the traditional staff, is basically a linear stream of notes. The performer needs to navigate some extremely challenging rhythmic ideas spread out over the percussion set up. 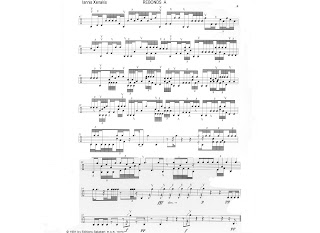 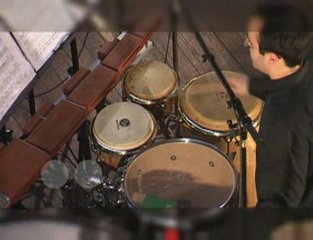 Karlheinz Stockhausen is Germany’s 20th century musical icon. Whereas someone like Feldman thought in terms of quiet, almost invisible music, Stockhausen’s music was often a true spectacle of production. His Mikrophonie I, written in 1964, is for a 60” Paiste Gong (Stockhausen went to the factory and hand-picked one out of the 5 Paiste had on hand), 2 microphones, 2 filters, and controllers operating the filters and microphones. 2 percussionists manipulate the Gong with various implements and strikers, while 2 performers move hand held microphones around the face of the Gong, and the final 2 performers control the sound from the microphones through electronic filters. Stockhausen himself wrote:
“I searched for ways to compose—flexibly—also the process of microphone recording. The microphone . . . would have to become a musical instrument and, on the other hand, through its manipulation, influence all the characteristics of the sounds. In other words, it would have to participate in forming the pitches—according to composed indications—harmonically and melodically, as well as the rhythm, dynamic level, timbre and spatial projection of the sounds.”
As much as there is room for performance variations, the actual movements of the performers are scored out in detail. 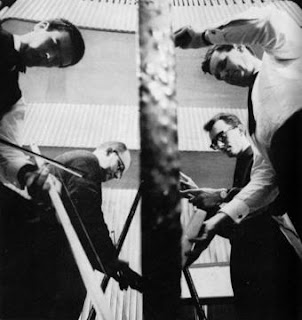 Stockhausen’s other great piece for percussion is Zyklus (cycle). Composed in 1959 it features a percussionist in the middle of a circular set up. The performer is free to start the score at any point and work their way (L to R, or R to L) around the set up until reaching the starting point agin, where they stop. The graphic score is very specific in some details, and very open in others. Perhaps the greatest exponent of Zyklus, was percussionist Max Neuhaus (the same percussionist Keldman wrote King Of Denmark for).  Neuhaus wrote this about Zyklus:
“I first saw the Zyklus score in January of 1962. At that time I was excited a great deal by several ideas, although they didn't actually form themselves until some time later. The most important of these was this particular superimposition of two concepts of improvisation and composition - the possibility of a performer being able to 'improvise' with fully composed elements within a composed structure. At that time, however, I had no idea of the difficulties involved in realizing this idea.” 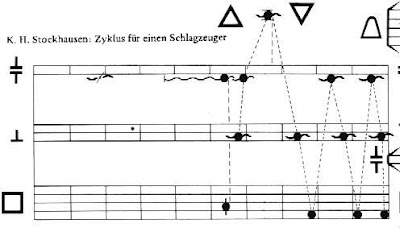 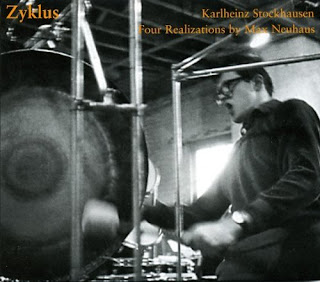 Various performances of all these pieces can be found on YouTube.
Selected discography: