March 21, 2011
Let’s take a look at the career of the recently retired Bill Bruford. Bill had a way of exploring the boundaries of drum set playing like few other drummers.
While during his time with YES, he stuck with the standard 4-piece drum set and cymbal set up. Starting in 1972, he joined King Crimson and fell under the influence of fellow Crim drummer, Jaimie Muir. Jaimie came out of the burgeoning UK improv scene and brought with him a certain whimsy (or madness) to his percussion playing. Beside the standard drum set up, he used sheet metal, found percussion, noise makers, toys, etc—all to create a fantastic percussion landscape over the top of Bruford’s more standard rock drumming pulse. When Muir suddenly left the group, Bruford took over both rolls and added Gongs, bells, wood blocks, and other sounds to his set up. His drum set eventually became a mixture of Ludwig, Hayman, and Premier drums. 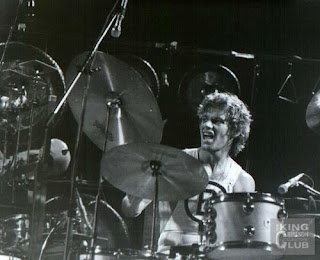 Crimson packed it in in 1974 and Bruford worked in various bands, including Gong, Roy Harper, and Genesis. Then in 1978 both the bands UK, and Bruford came out with Bill sporting a set up using Roto Toms for the mounted toms. While still a very conventional set up, Bill was exploring different drum sounds than anyone else at that time. 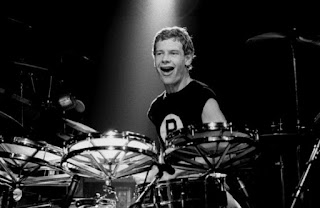 But it wasn’t until 1981, when Robert Fripp reformed King Crimson (at first called Discipline), that Bruford totally reinvented his drumming and set up.  Accordingly, Robert Fripp set out some rules (challenges) for Bruford to follow: no hi-hat, much less cymbals, and different sounds that didn’t interfere with the guitar’s frequency spectrum. Bill came up with perhaps his most iconic set up: 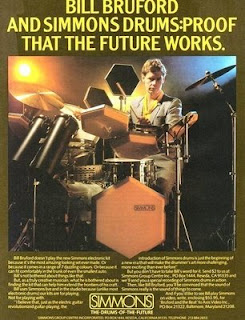 Bill’s drumming approach changed too: he moved most of the ride patterns away from the cymbals to the octabans and roto tom, giving things a much more rhythmic, tribal feel. A time passed, he added a 2nd set of SIMMONS pads at the front of the stage that he and guitarist Adrian Belew would play on Waiting Man.
Bill continued to used the hybrid acoustic/electric set up, bringing back the hi-hat, with Anderson/Bruford/Wakeman/Howe , his own Earthworks group, where he added a keyboard synth to his pads, enabling him to play chords and melodic lines. In fact, he often took the place of both drummer AND keyboardist in many of the band’s songs. 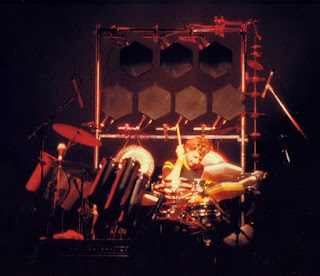 Later on, when he dropped the electronics, he again reinvented his set up by moving the toms to the left and right, having all the drums on the same level—with the cymbals all in a line on an upper level— and putting the hi-hat in the center of the kit. He also staggered the arrangement of the toms L-R as: 13”, 10” snare, 12”, 16”. Thus the usual clattering down the toms from high to low was gone. 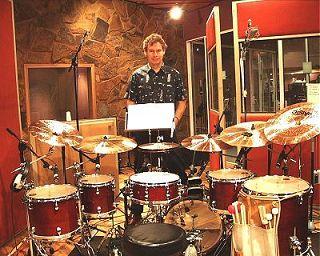 40 years of percussive explorations, driving the art forward, thinking out-of-the-box, and inspiring drummers everywhere. While we all can't be as creative (or famous), we can all do our part to move away from cliches and playing the same drum set ups & rhythms that have been recycled over the years.
~ MB