The Artist's Way - The Book That Saved My Artistic Career

June 14, 2018
My artistic career had come to a crossroads in the mid-1990s when I felt both a lack of direction and motivation. Then, in 1997, I came across a book called, The Artist's Way, by Julia Cameron. In the midst of the 90's self-help craze, this was a book all about artistic self-help. The book is a 12-week course on recovering, and jump starting, your artistic ability/career. Each chapter covers a different aspect, giving you affirmations, practical advice, and exercises to do during the week. It doesn't teach you how to be creative, but how to access and nurture your innate creativity. 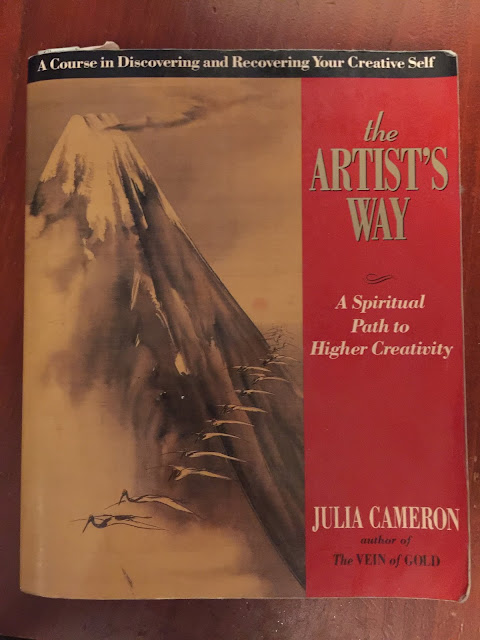 My well worn copy of The Artist's Way

One exercise Cameron recommends is morning pages. Each morning when you get up, sit down and write out 3 pages—long hand is preferred to typing—of whatever comes to mind. It's a sort of stream-of-consciousness brain dump diary. I was faithful to this at first, filling up a whole filing cabinet of notebooks, but eventually felt that it was a lot of effort to write mostly useless material. Yes, there were some good ideas in there, but most of it was too unfocused for me to carry on with it. I find much more satisfaction in doing actual writing with a purpose. This is why I currently have 3 blogs and write for a variety of other sources. But the morning pages work well for many and I have nothing against them.

I was fortunate to see Cameron in Chicago, when she presented a workshop at a bookstore. She is an excellent speaker, and her presentation and the exercises we did that day, helped to really bring the book to life. I was excited to keep working with it.

In 1998, I found an online group dedicated to working through the book. The group moderator presented the material and gave out the exercises. All the group members discussed the week's lessons and also what was going on in our own creative lives. We shared horror stories, fears, ambitions, and successes. It was an interesting and lively group filled with writers, photographers, painters, sculptures, and musicians. The discussions were fascinating and revealed the group members to be all the different artistic character types that Cameron mentions in her book. 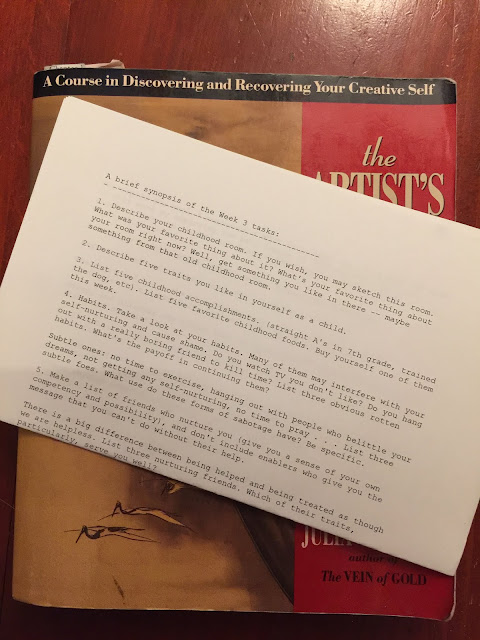 The whole session went well and I was making a lot of progress with my writing. I had written and contributed some short stories that were well received. I was encouraged to write more. Things were going so well that I decided to stick around for another session, so that I could hopefully go deeper and create even more. A number of others, who were also creating a lot of work, decided to stay on too. It was a very tight, happy, online community.

The 2nd session went well also, and I was really feeling creative. I had even started writing a novel (which I never finished, but it became the catalyst for a lot of other writing, including some books). One thing I noticed along the way were a number of group members who were what Cameron called, shadow artists. A shadow artist is someone who talks a good game, but never actually gets into the game. Somehow they're always waiting for something, like the perfect moment to start their work.

A good example of a shadow artist is, someone who wants to be a writer and says, “When I get that new desk, I'll start writing.” They get the new desk and it then becomes, “When I get that new chair, I'll start writing.” They get the chair, and it now becomes something else that they need before they can start. A shadow artist is just that—the shadow of an artist. They talk all about it, but never actually do anything.

I noticed a number of group members who were shadow artists. They talked a lot about working, but never had anything to share. And some of these people were obviously very talented and creative. Some had also been in the group long before I came along (and were probably still there long after I left), making a career out of being a professional shadow artist.

The group was fun and interesting. I could have stayed around forever, going through the book over and over, but I realized that I needed to fly out of the nest, face the real world, and actually create some art. So I said my farewell and moved on, realizing that many others were set to go around again, like the mythical Sisyphus rolling the rock up the hill over and over, time and again.

I found the book on a shelf the other day, when I was searching for something else, and it brought back a lot of memories. Paging through it, I found all the old group exercises that I had printed out back then. The book is also filled with notes and book marks, a testament to having been used extensively back in the day.

I also went through her next book, The Vein of Gold, which is a continuation of the ideas presented in The Artist's Way. Both books are still relevant today, and I recommend them to anyone who is looking to either jump start their creativity, or to keep it going.