Playing improvised music is an interesting experience. While you can practice rudiments, beats, scales, and other ideas, you can't really practice improvising. Sure, I can play away in my studio all day long—and I do, working on ideas, looking for sounds, finding different techniques—but it's not the same as playing in front of people, or with other musicians. This is because, at least for me, improvising is a reactive experience. When I'm playing in an improvised setting, I'm reacting to everything around me: the room, the audience, the other musicians, my mood, and even how my instruments sound and react at that specific moment. This is very different from playing notated music.

Because of this, I find that playing live is always a new experience for me. Rather than playing in a band and following a set list, where the same songs are played in the same order every performance, I never know what to expect. To me, the most exciting part of this is discovering new things, new sounds, new rhythms. Even after all of these years playing, I still discover new stuff each time I perform.

But this all doesn't just happen. When I play, it's based upon years of study and practice (yes, practicing rudiments, beats, scales, and other ideas). It's also based on a lot of trial and error, where I've experimented and figured out what works and what doesn't. Nonetheless, It's important to me to not just recreate exercises or patterns that I've worked on in practice. 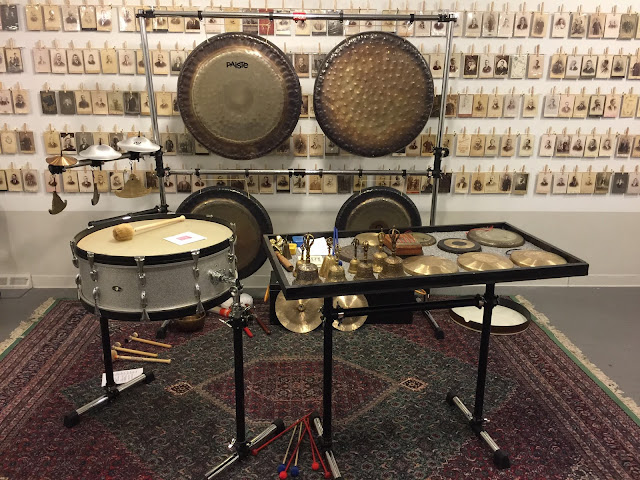 What sounds should I choose tonight?

The things I've worked on and learned are just starting points. They are tools in my tool box and I might never use them, or use them for a very short time. The idea of reacting to the moment is most important. When playing live improvised music, there isn't the luxury of taking the time to think about what you want to play. For me it's an ongoing process of hearing sounds/rhythms/ideas in my head in real time, and then reacting to that by grabbing an instrument/mallet that matches the sounds/ideas in my head. I may even choose to not play anything because what I'm hearing from the other musicians is enough and doesn't require me to interfere with it.


Study hard. Learn a lot. Then forget it all.


A good example of all of this is a recent gig where to my surprise, most of what I played was either new, or it was a new version of something I've done before. I was just following the music being created, and it lead me to new territory. Part of this newness was my instrument selection. I looked around my studio and made a conscious decision as to what instruments and mallets I would bring to the gig. I looked at things, hearing their sounds in my mind, and seeing if I was feeling those sounds. While I have a standard set up, that doesn't mean I will always bring it, or bring all of it. Sometimes I don't bring instruments so I can't rely on ideas/licks that are too close to the surface and end up falling back on what to me are, clichés.

The other side of this is, that for me to try and recreate what I did (no matter how great or exciting is was), just wouldn't work, because it was product of the moment. At some future time, I may revisit some of those ideas, but they will be different versions, because the musical situation will be changed.

I also compose and play a lot of notated music, where the goal is to recreate the same music every time. This takes a very different approach and mind set. I find that I need to be able to think in 2 completely distinct ways. I don't find either way harder than the other, just different.

What goes on in your head when you play?