2 performances scheduled for today (Saturday, January 16, 2016), with a 3rd hastily thrown in. This always makes things even more interesting. 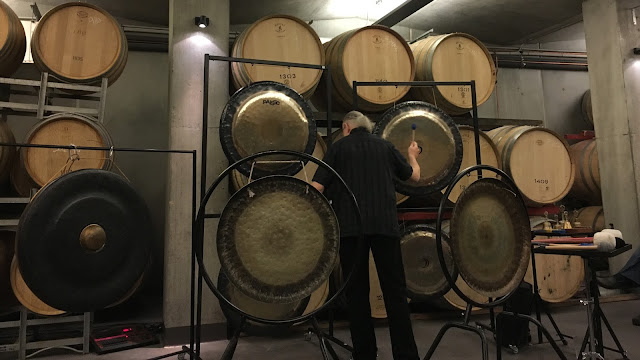 Starting the day off with a 2nd performance in the Barrel Room. The advantage here is knowing how the room sounds. I played very similar to yesterday's performance: lot's of long tones to fill the space, and playing with the beats again. Another very appreciative audience. I could play in here all the time.

As sometimes happens at these large festivals, someone canceled, leaving a hole to fill in the scheduling. I had been asked to fill in for something yesterday, but my playing back at the pier in town made it impossible. Today I was walking around the grounds when I came upon the festival's curator, Brian Ritchie, who asked me, “Someone canceled. Do you want to play on the main stage with me and a bass player?” “Sure,” was my reply. I then made my way to where my gear was stored to inform them of the performance and make sure things got sent over to the main stage. 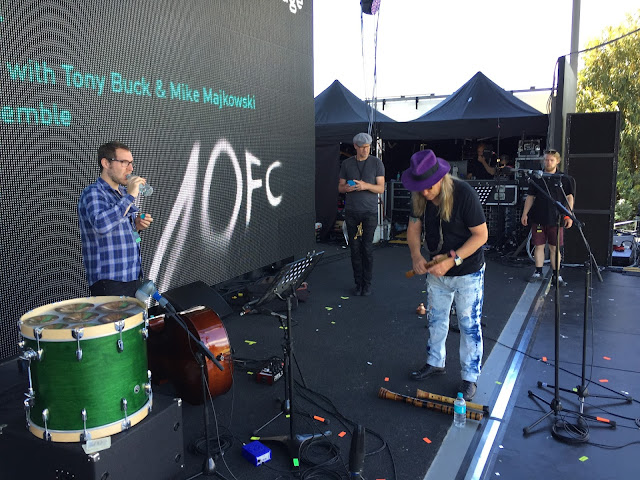 Sam, Peter, and Brian preparing for the gig

The main stage is an outdoor stage at the back of the museum. This is where the night before the fests headliners, The Flaming Lips, had played. So it's a standard, large concert stage. As things turned out, I played in a quartet, with Brian on Shakuhachi, Peter Woods on trumpet, Sam Pankurst on double bass, and myself on percussion. As Peter and Sam are part of the Australian Art Orchetra, we went on under the guise of The Australian Art Orchestra Quartet. The music was a sort of free jazz blowout, featuring tunes by John Coltrane, Albert & Donald Ayler, and Brian. 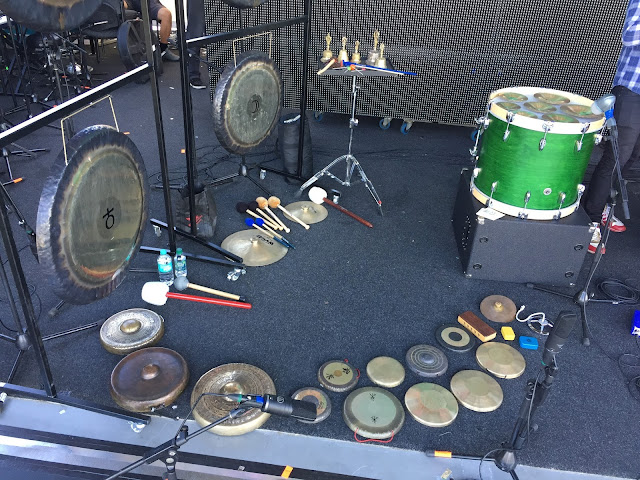 The set up: variation on a theme with yet another bass drum

Right away, a big difference was being outdoors and having all my gear miked up. An interesting part of that was as the stage faced the back of the museum, there was an interesting slapback echo off of the building. I tried to use this to my advantage, especially when playing short, percussive sounds, like a wood block or small, muted Gongs, setting up  rhythm patterns using the echo. Also, if I played fast patterns, I could even get a bit of a layering effect of the sounds. So again, it was all about listening.

One problem I had was that I lacked any sort of decent monitors, it was sometimes difficult to hear the others from my vantage point, especially if I played loudly. So I had to watch my volume. It helped that when I faced the others, I could watch what they were doing (I could even read off the charts the bass was using). But when I played the large Gongs, I had my back to everyone, so listening and keeping my volume down was critical.

Not having a drum kit, or even a ride cymbal, I had to find different ways to move the music ahead. I tried to be more rhythmical, using the bass drum and shorter sounds to play more patterned rhythms. Since I was playing the part of the drummer, I especially followed the bass. A lot of the music was atmospheric in nature, so there were plenty of times where I used the large Gongs to create a big wash of sound behind everything.

I found myself wishing I had my own gear from back home, especially my bass drum, because there were sounds and ideas I wanted to play, but couldn't. But the challenge of playing unfamiliar music, with unfamiliar musicians and gear, is good to do. It keeps you honest, and doesn't allow you to just fall back on your old licks and ideas. It keeps you at the top of your game. All in all, the set went down well and I had a great time.

Back In The Museum

For my 3rd performance of the day, I found myself back deep inside MONA. This was a Pop Up performance, one of the sort of unscheduled performances throughout the museum. When I was scouting the place out the day before the fest, one of the things Shelley, the executive director, told me to do, was to pick out a place I wanted to play. So I wondered around and looked for something unusual and different from where everything else was scheduled.

One of the things about the museum is that there are no tags or signs on any of the artwork, so to know what things are, you need to use the free iPod and headphones, and do a self tour. There you can get names and descriptions of all the works. While I had the iPod, I just sort of wandered around taking pictures of the places that interested me, so I didn't always get the names of them. 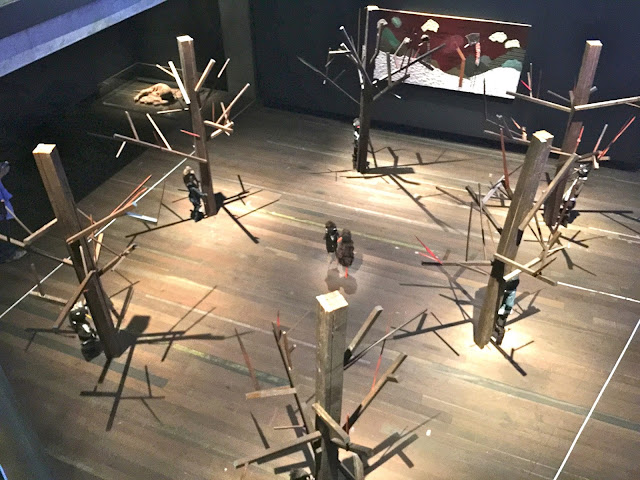 There were a lot of great spots and great artworks to be by, but the place that most interested me was a series of Penguins with wooden trees. I was completely intrigued by how it looked, especially because you could view it from many different angles, including up above. Thus the artwork changed depending upon your viewing point. My 1st inclination was how fantastic it would be to set up inside the trees in a sort of circular set up. My idea was art within art. I passed my request on, showing Shelley a photo and describing my idea, all the while realizing that the chance of it happening was probably slim. But if you don't ask, you never know.

Sadly, while a great idea, it was a no go. So the next best thing was to set up next to it. This still had the advantage of being viewed from multiple levels. My gear ended up set between the wooden trees and a video installation. This made for an interesting situation, as the video screens offered a changing light pattern, while the coinciding audio made for additional sound during my performance. Rather than a distraction, I looked at that as something to work with, a sort of John Cage moment. 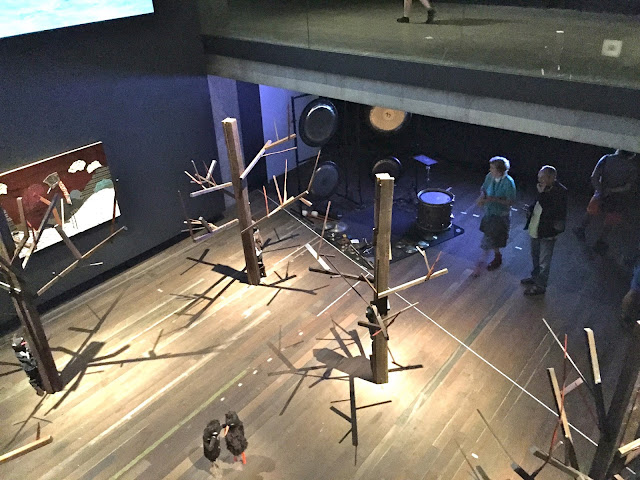 View from the balcony

This was a rather informal setting, where the audience sat on the floor, or stood around that level or the balcony. So while I couldn't go in the display, I took advantage of walking around it, and through the people, carrying various Gongs and percussion. This allowed me to interact more with the audience, and also play around with the varying acoustics. 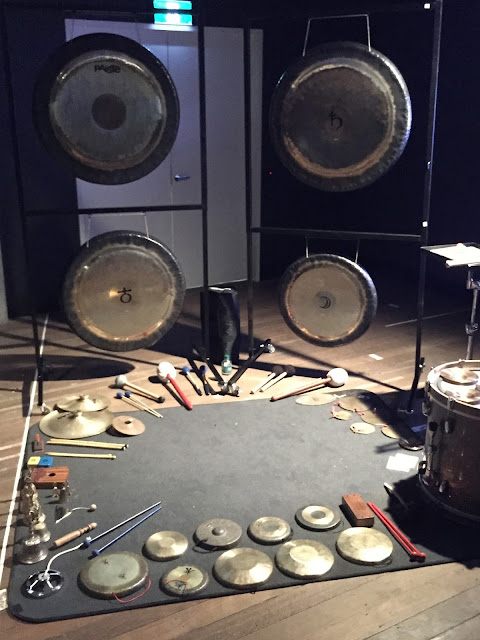 Variation on a set up #5 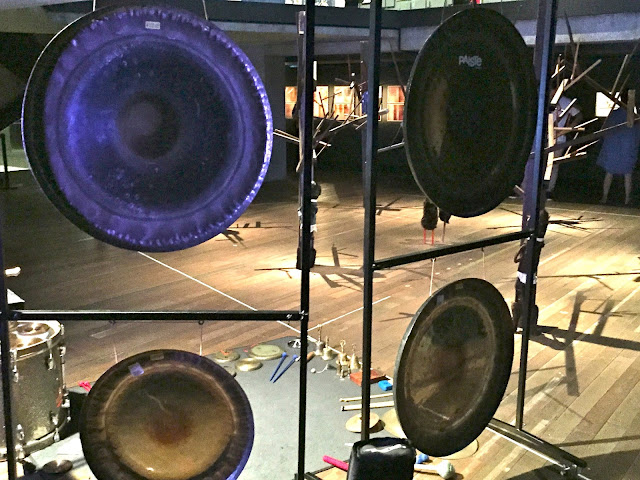 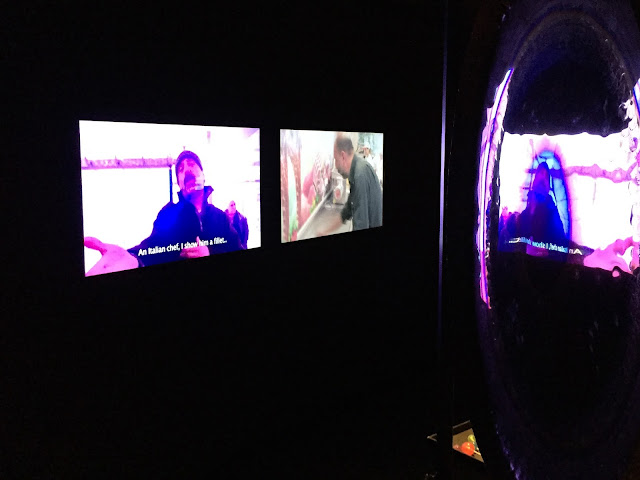 It's an interesting situation to play in, as people are coming and going, milling about the different art works. You have to be able to play with all these different distractions going on. It's makes for an interesting performance.