December 03, 2015
Today we have 2 short videos of myself improvising with Wilhelm Matthies. Wilhelm plays his own invented string instruments that he calls Mosesa. Basically it's a set of strings stretched over 2 bridges, sitting atop empty plastic bottles that act as resonators. The bridge/bottles are movable, to change the string length/tuning. Wilhelm plays it with a bow, or plucks the strings with his fingers. The sound is sort of reminiscent of a string bass or cello. 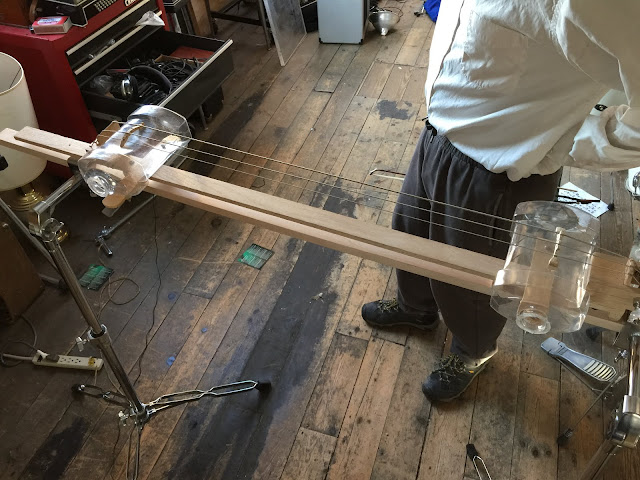 These 2 videos are part of a longer improv that I cut into 3 different pieces, as the moods varied in each one. The 1st video is a bit of a chaotic noise piece. Wilhelm starts with low bowed sound. I chose a small Paiste Gong to get a long, dark tone to sort of match what he was doing. Then I switched to my Floor Gamelan, which is a set of small Gongs (usually 8-16 Gongs of 4"-12" in diameter) that I place on the floor/carpet to get a muted sound. Unfortunately, I had changed the camera angle here and you can't really see what I'm doing, as things are obscured by a case that elevating some Singing Bowls. I'm also playing a wood block, spring drum, and some small cymbals on the floor. 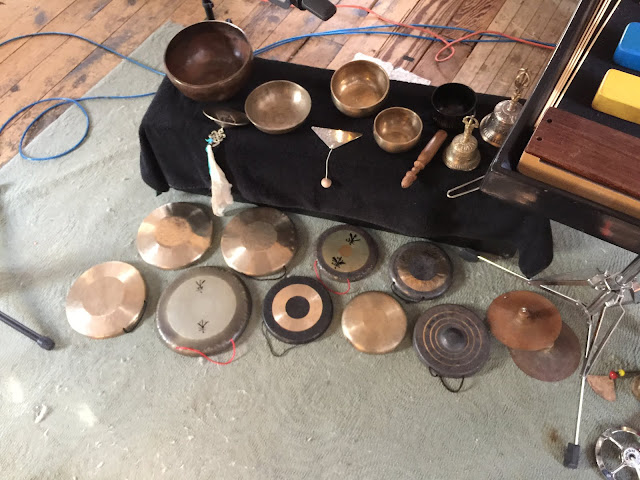 The Floor Gamelan in front of the case.

Next, I moved to come small, cheap, Children's cymbals that are mounted on wooden handles (you can see them in the above photo at the far left next to the trap table stand). These are old and beat up, but they have a unique sound. They are easy to play and mute with your fingers/hands. I can be seen swirling them, fluttering them, clapping them shut, and crashing them while listening to Wilhelm and trying to add some counter sounds and rhythms to what he is doing.

In the 2nd video, it's all about long tones, with both of us bowing. It's also a good example of making decisions that don't work out the way you expect them to. Right at the beginning, I bowed my large Sound Plate, but it didn't work very well because it's mounted loosely, so I quickly switched to a Gong. It happens again later, when I switched to a different Gong, and because of the set up, I couldn't comfortably bow it, so I switched back to the other Gong.

So improvising is always abut making decisions. When they don't work, or sound like you wanted, you just quickly move on to something different. A big part of things is knowing when to abandon one idea for the next. And as you can see/hear, I'm certainly not above making choices that don't work. Sometimes it's purely about the sound, as you may choose a good sound at the wrong time and it doesn't fit the music. Other times, like here, you choose something that doesn't work because of the way it's set up. You hopefully remember these things the next time you think of doing them.


In Part 6 we'll explore another track from this session.