An Inside Look At Improvisation - Part 1

November 10, 2015
This is the first of a series of blog posts on creativity and improvisation. Improvisation is one of those sort of intangible things: you can't teach it as much as you just demonstrate it and show people examples. Musicians can only learn it through trial & error & experience.

What I will be writing about here is my own personal experience and adventure in the world of improvised music. While I've played in all types of bands, and all different styles of music, what excites me the most is improvising. I especially love improvising with people I've never played with before, or never even met before. It's a challenge to find some sort of common ground, common language, and hopefully produce some compelling music. It doesn't always work, but when it does, it's amazing.

Rarely have I ever been in a situation where the music fails to appear and things fall completely apart. In almost all cases, magic happens, even if only for a few minutes out of the larger whole. But even what is not magic is interesting because it is necessary for the magic to appear. 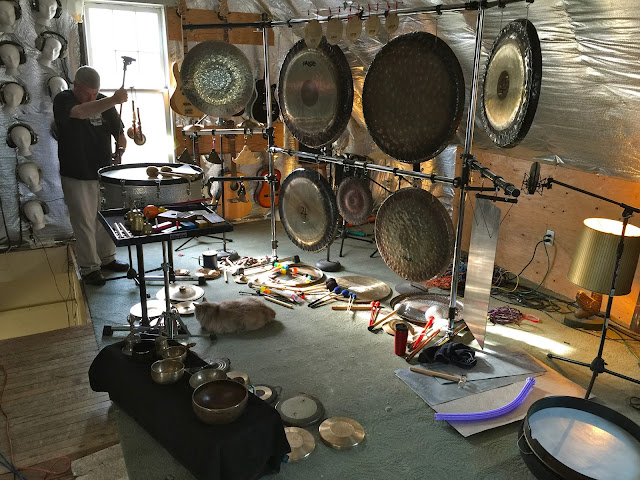 I was recently a part of a recording session set up by my friend, Jason Wietlispach. After a session I did at his recording studio a few months ago, he approached me about doing an all day session where I would improvise in various duos and trios with different musicians for each. I ended up playing with 18 different musicians, having played with only 2 of them before. 4 others I knew, but the remaining 11 I had never met, or knew anything about.

Needless to say, this was a challenge, not only in endurance (the session ran around 10 hours), but in being creative. I brought 13 bags/cases of Gongs, drums, and percussion with me. My approach was to try and not repeat myself in sounds, over the course of the session. I wanted to give each duo or trio its own sounds. I also wanted to give each one its own rhythms.

For the most part, I succeeded. There were some Gongs used in almost every track, but I varied the way they were played, using different mallets and implements. I also brought extra Gongs that I switched out for different tracks. When I used the same instruments again, I always tried to play them in a different way, coaxing different sounds and rhythms out of them. And there were a few times I did almost the same thing because the music called for it. And that was always my guide: what did the music call for?

As a percussionist, it's so easy (and tempting) to just grab something and start playing it: a shaker, a bell, a small drum. But for me, it's a process of always listening to what is going on—both rhythmically and sonically—and basing my instrument/rhythm choice on that. A lot of that is just intuitive to me: I hear a sound and I react to it. But that intuition is backed up by 40+ years of playing music and paying attention while making that music.

One thing I did was bring my video camera. I recorded all but 1 of my performances (I forgot to hit record!) with the idea of using some of these videos for this series. The plan is to dub in the finished audio mix and then talk about what I was doing, what I was thinking, why I played what I did, etc. This way you can get an inside look into my process of what improvisation is about.

I'll talk about what I did in relationship to what the others played, and my ideas on working with other musicians. I'll also talk about what worked, and what maybe didn't work. This will all unfold over the next few months. Then I'm off to Australia for a few weeks and I'll blog about that (I get to improvise with some great musicians I've never met!)

So next up is Part 2: Developing A Rhythmic Language