The Importance of Responsibility - Part 2

August 04, 2013
Ok, here's the report on tonight's improvising. I've posted a 10 minute excerpt from the nearly 30 minute set below. I tried to pick out different moods/atmospheres/etc. to represent what went down. I played in a trio with 2 people I never met before, or never even heard before. So this was definitely a 1st meeting:


The recording was made with my recorder placed on the floor, just to the right of me, and aimed more across the stage in order to try and get a decent mix. Since the voice was slightly in front of me, and going through the sound system, it's a bit low in the mix. But you get the idea of what was going on. 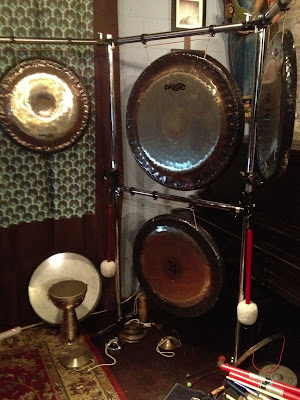 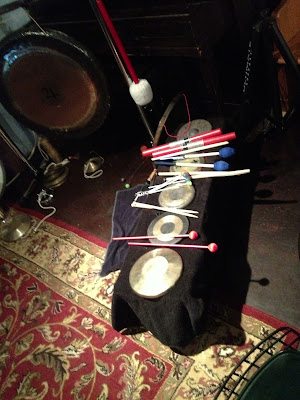 You can here excerpts from the performance here:
'Unrehearsed' short edit


The session involved a lot of listening, as I often wanted to match what the vocals were doing with pitch/harmonics/textures on the Gongs. I also didn't want to overpower the voice, which would be easy to do, even with her going through a sound system. Because the bass was often played arco, and enhanced with electronics, I also tried to offer some percussive contrast to all the long tones.

I was armed with 4 large Gongs, a Tar, small muted Gongs, bells, small Sheng cymbals, and a few other percussive devices. What intrigued me the most are the few new things I did that were different ideas/techniques, like muting the large Gongs a certain way to produce different harmonics—I never did that before. Part of the fun of improvising is discovering new things. So improvising, at least for me, is often as much a laboratory as it is a performance. But again, I need to be responsible for my sounds. I can't just start doing weird things, hoping something will work. So that's were listening comes in, but also, intuition. I've been doing this for 40 years, so I have a good idea of what I can do musically in any given situation. I also know what my instruments can do. But it's also about reaching for that other sound, the unexpected one.

As I said in my last blog, this type of music is all about listening, and then more listening. I really work to focus on what's going on around me. I don't ever want things to seem like a percussion solo with accompaniment. This should be a team effort.

I liked the instrumentation and how open it was (I prefer duos & trios). Sometimes these sort of things have too many people, all playing at once. Things can get too dense and lose clarity. I even dropped out a few times just to let the music breathe more –note to young musicians out there: sometimes NOT playing is the best thing you can do. Some of what we did was really interesting and had it happening, while some of it didn't quite reach the mark. That's the nature of improvising. Overall, I'm pleased with the result. If we were able to work together more, even rehearse a few times, I could see this developing into a real solid trio.