The Death of the Paradiddle 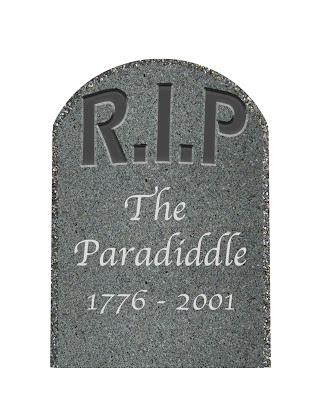 This post was inspired by a spam comment to this blog a while ago where somebody posted their info & links for their paradiddle method. Ironically, they posted their random spam in a post called, Sound, Texture, Options & Imagination:

How ironic this comment is. Obviously this person has NOT followed my blog at all, if they did, they would realize how the paradiddle has very little to do with "Sound, Texture, Options & Imagination." The paradiddle comes out of military drumming, which is all about regimen and repetition, NOT creativity. While I feel that the 26 rudiments do have their place, I also think that that place is often in the past. Time to get a new alphabet and speak a new language… 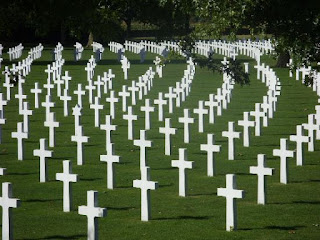 The rudiments in a modern context…

So, I've been thinking about this these past few weeks. Pushing paradiddles is not very progressive thought. If you are playing in a marching band or drum corps, then paradiddles and the other 26/40 rudiments are a necessity. Marching music was founded on what became the rudiments, and it continues to be the core of that style of drumming. But what if you play in the symphony? Or play drum set? Or play some sort of avant-garde percussion? Is the paradiddle, and the rest of the rudiments, relevant to the music you play?

At their most basic, the rudiments are the building blocks of marching style drumming. In fact, if you look at most marching drum music, it is a succession of rudiments, played one after the other. This is fine and works well in this context. Looking further, the rudiments can be seen as rudimentary skills, short exercises to develop one's coordination & technique. This is much like learning your scales & chords on a melodic instrument, but in that context, you don't just play endless scales linked together—they are exercises!


It is not necessary to know and practice any rudiments
to play the drum set.

I'm not saying "don't bother to learn any rudiments," just that they aren't necessary to play drum set rhythms. Yes, practicing them will give you additional skills & coordination, but you don't need them. While someone like Steve Gadd comes out of a drum corps/military band background, and brings his rudimental ideas to his drumming, drummers like Ringo, Charlie Watts, Levon Helm, and many others have no rudimental training at all, and still do/did fine.

And that's the point. Modern drumming has evolved a long way from its military origins. Early Dixieland, Swing, and Jazz came out of the military drumming style, but we've progressed 80 - 100 years since then. I remember the late, great Joe Morello had a book called, Rudimental Jazz, where he broke down all the 26 rudiments into a jazz context. But he had to stretch most of them so far, and so out of their original form that it was really more a stretch of your own imagination than anything practical. Morello was a great technician and rudimental expert, but he never sounded like a drum corps. He had a great sense of taste & swing, and any rudiments he used were performed in such a different context as to have little or no relationship to their origins. The same can be said of most, if not all jazz drummers since 1960.

Early jazz figures, like Gene Krupa, Big Sid Catlett, or Baby Dodds, were still playing jazz/swing beats as swung drum cadences. But the only 3 drummers I can think of today who actively developed a style that was based on rudiments are the afore mentioned Steve Gadd, Ginger Baker, and Ronald Shannon Jackson. But they are exceptions to the rule, and the further we get from "the old days" (Gadd is in his 60s, and both Baker & Jackson are in their 70s), the less rudiments seem to find a place in modern drumming outside of drum corps.

In conclusion, Rudiments, make of them what you will. They are great exercises, but not necessary for most of today's drumming styles.  YMMV…