July 16, 2011
This is another revised and updated article from the past. This time looking at my ideas about Gongs and why I set them up the way I do.
In my solo music, I use 5 distinct gong stations:
The Kulintang  is a set of 8 pentatonic bossed gongs from the Philippines. They are similar to the gong chimes of the Indonesian gamelan.  While they aren’t tuned to specific Western pitches, they are tuned as a pentatonic set themselves. They are traditionally played on the center boss (also known as a knob, cup, or nipple) with soft wooden sticks. The sound is percussive and melodic. I can also strike the face to get more harmonics, or even turn them upside down and strike the sides getting a sound very much like church hand bells. Like everything else, I use different implements to change the tonality. Hard and soft cord vibe mallets bring out a very full, rich tone, while Vic Firth Blades create a lighter slapping sound. 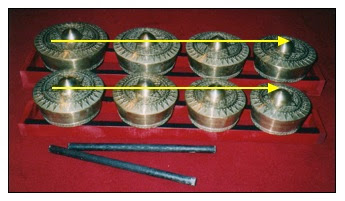 The tuning runs from low on the left, to high on the right. Traditionally, they are set up in a straight line of 8 Gongs. I prefer to set them up in 2 rows as above. 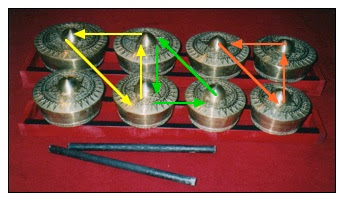 In this arrangement, I can visually see, and play, note patterns as triangles. 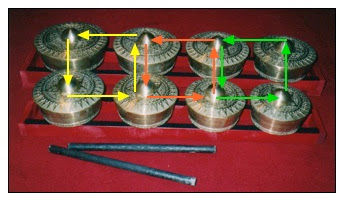 I can also play note patterns as squares, or other geometric shapes. Being a visual person, I respond to the shapes of the music I make. 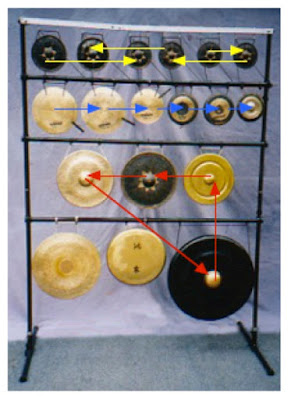 The melodic gong play is made up of a variety of gongs I have selected over the years for their specific tunings. The top row are Thai (also known as Burma) gongs that form a set of 6, in an arbitrary scale that I put together for its melodic qualities. The second row comprises small Chinese Chau and Wind gongs, with a small bossed gong made by metalsmith Steve Hubback on the far right. They also comprise a scaled set that works out with the scale of the top row. The bottom two rows contain 4 larger bossed gongs that are used as the bass and chordal gongs in this set. There are also a wind and dish gong that are used for effects. While none of the gongs are tuned to a true pitch, they form a melodic set on their own, much like a gamelan orchestra is tuned to itself.
In the photo, we see a tone map for my song, Water Wheel. A 4-note repeating bass line is played on the large gongs (in red), while the 1st melody is played on the 2nd row of gongs (in blue), and the 2nd melody is played on the top row (in yellow). Accents are played on the wind and dish gongs. 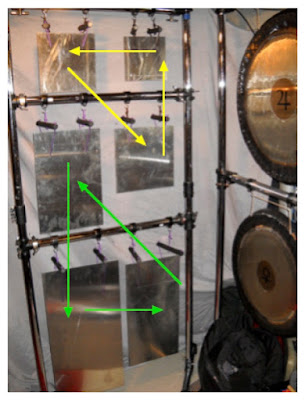 The Sound Plates are a specially constructed set of 6 aluminum tuned plates that I use for both melodic lines and special accents. Again, I think of the melodic relationship in the form of triangles, squares, lines, points, etc.
The Table Gongs & Bowls are small Gongs and Singing Bowls placed on percussion tables placed at the front of my set up. The Gongs produce a short, muted sound that I augment with a wood block for an Oriental effect. 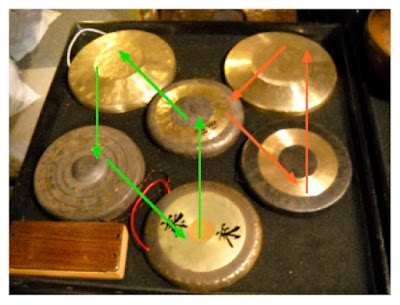 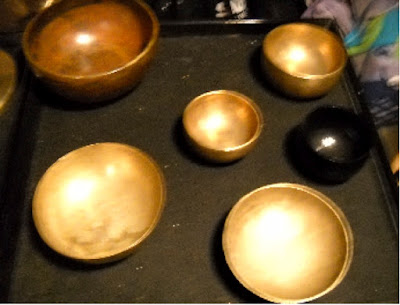 The above photo shows the 4 over 3 pattern that is part of Soundings #2. At other times the patterns will overlap or interlock. I can do the same sort of thing with the Singing Bowls. 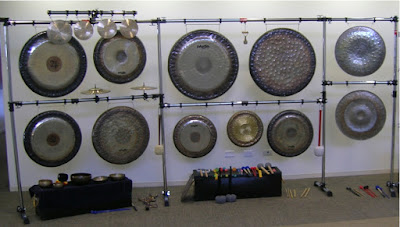 With the Large Gong Array I again think and play in patterns (I’ve since added 2 more Gongs on the right hand side, giving me a symmetrical set up of 4/5/4 Gongs). So everything I do musically is based on visual cues and motions.
Whew! That was long. Now if you've hung in there, you'll have an idea of how I think and create music. I hope you've also been able to find some usable ideas as to mapping out your percussion ideas.
~ MB